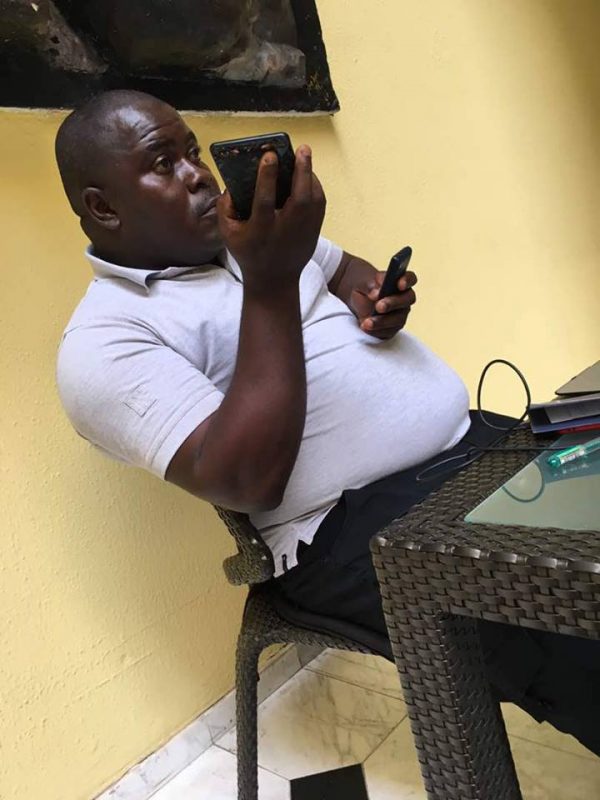 A businessman identified as Alex Best Odiegwu has raised an alarm after he was allegedly defrauded by a suspected scammer at Sheraton Hotel in Abuja after delivering some items valued at N220,000.00.

THIS MAN DEFRAUDED ME AT SHERATON HOTEL ABUJA:

On 9th April 2018, the man in this picture (now at large) walked into my office at Wuse Zone 3 Shopping Complex, Abuja. He said he needed some office items as he was setting up an office. There was a Mac mini device he needed which I did not have. I took him to EMAB Plaza where we searched but could not find the device. So we went to Silverbird where he bought an office table and a chair and he paid cash.

He succeeded in making me believe that he was indeed setting up an office. He then gave me an appointment to meet him the next day, 10th April, 2018, at Sheraton Hotel, Abuja where he claimed he was lodging. At about 7:30am the next day, he called me with 08147457422 to meet him at Sheraton Hotel. He asked me to bring along an Apple laptop (UK-used Mac book air) a pouch and a bag, all amounting to N220,000.00.

I met him at Sheraton having breakfast at the restaurant. I observed he was very cordial with the waiters and waitresses, even calling them by their first names. A man who apparently ate with him stood up from his table and hurriedly left. He told me he just paid the man for office shelves, table and chairs for his new office and he just transferred money. So I handed over the requested items. He tried to transfer money to me using his mobile app and it showed that his daily transaction limit had been exhausted. I did not know he was setting me up. 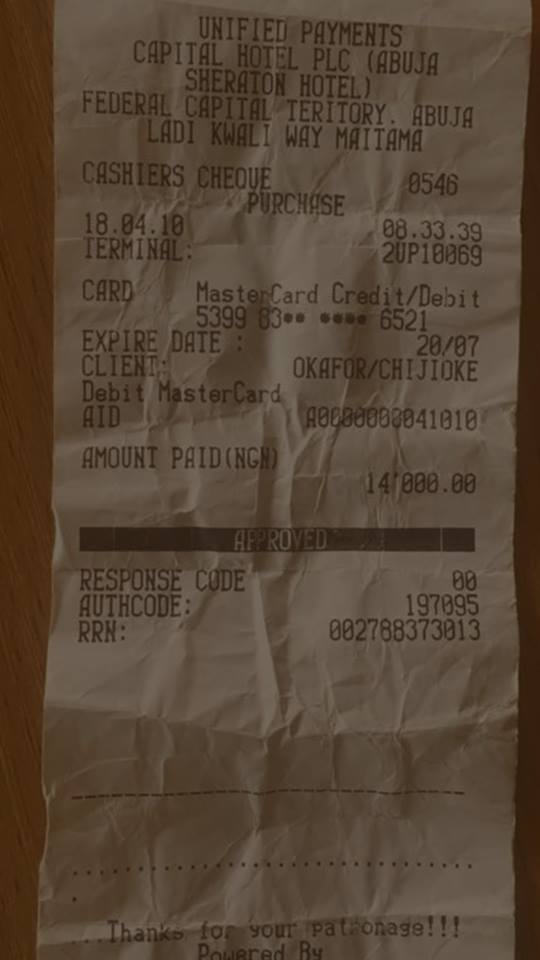 While I had no reason to doubt his genuineness but without knowing what prompted me, I took a picture of him without his knowledge. He then said he was going “upstairs” to bring his cheque book. He came back to the restaurant with an Eco Bank cheque booklet. He handed over a leaflet with my name and N220,000. Somehow I just looked at the amount and my name and dashed off with what I thought was “Eco Bank cheque”. I was in front of the bank when I saw I had an “Oceanic Bank cheque”. Why I did not see it earlier remains a mystery to me till date. I do not know if I was a victim of ‘jazz’ or I merely fell to two days mind conditioning.

As soon as I realized I was given an Oceanic Bank cheque fraud alert bell rang in my head because Oceanic Bank is not an existing bank. The cheque belongs to ‘Echefu Christoper Odinakachukwu’. I ran back to Sheraton. Lo, he had disappeared from the restaurant. I reported to the hotel officials and it turned out he was not a guest! Sheraton Restaurant staff said they had been looking for “us” to pay our bill of N14,000. They insisted I must pay for “our breakfast”, which was for three! I had to rally friends to come to my aid and the money was paid. 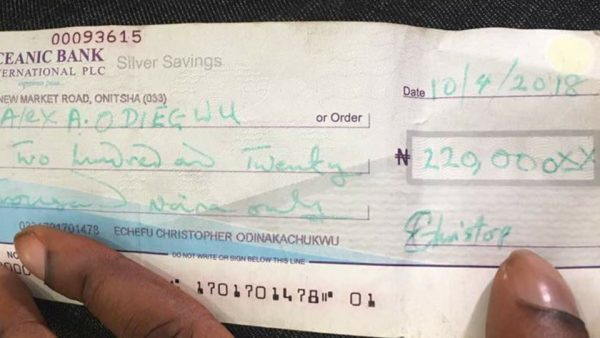 It took time before hotel staff would believe that I was a victim of fraud. We checked the Sheraton CCTV recordings together and saw how the conman ran away from the hotel without paying for the breakfast he took with his friend. The hotel chief security led me to lodge a report with SARS at Abattoir. They asked me to bring N50,000 to track the phone number, which I did not have. I however gave them N5,000 I had left on me. I have waited since then to see if the police would have, all to no avail. The police has not got back to me on any findings. The hotel management has also not said anything further. The line the man used (08147457422) never rang again after the incident.

I have decided to bring the issue to the good public, perhaps if the good people reading this can keep sharing this it may get to the fraudster or to people who know him would see it and call him out. It is also important to put this out to warn unsuspecting prospective victims to beware of this conman. He looks well fed, successful and innocent, which is very dangerous. I am just a young man struggling to make out my capital since I took to business after my graduation a few years ago. I took the laptop the fraudster defrauded me of from a neighbor, to sell with a little margin. This is how I survive. Not believing my story, the owner of the laptop reported me at the Zone 3 Complex Police Post. I have started paying back for the laptop in agreed staggered installments. 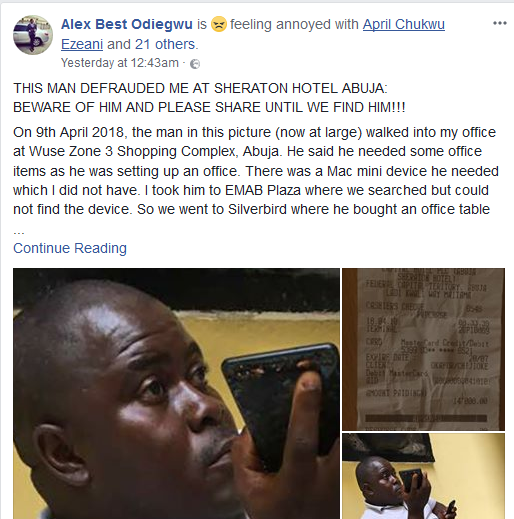 PLEASE help me share this as far as possible. This evil man cannot steal N220,000.00 from a struggling young man, make me pay for his breakfast in Sheraton and go on with impunity to defraud other victims. Please share until he is arrested or he comes back to pay me my N220,000.00 and the N14,000.00 he left for me at Sheraton Hotel Abuja where he was forming ‘bigman’.