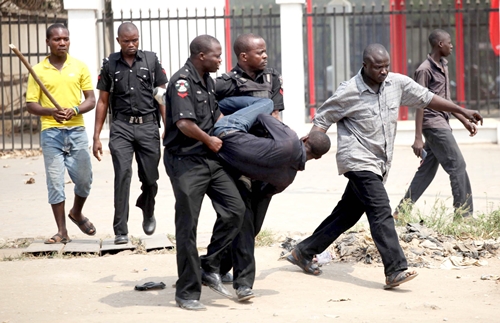 The Edo State Commissioner of Police, Babatunde Kokumo, has announced that its officials have arrested a suspect in connection to the brutal killing of Pastor Pius Eromosele at his farm at Odighi in Ovia North East local government area of the state, as the man has insisted that he is a hunter.

The killer suspect identified as Tahiru Usman, who said he went to buy cigarette when he was arrested, was apprehended and items such and blood stained dagger and cutlass and a dane gun were found on him.

Speaking to newsmen, the Police boss said the suspect was arrested while combing the bush after the two workers of the late Pastor who escaped from the kidnappers den were debriefed.

Tahiru, who was paraded before journalist at the police headquarters, claimed that he brought the gun from Kebbi State and was in the area to hunt for animals, adding that the blood on the dagger and the cutlass belonged to the animal he killed which was still inside the bush.

Late Pastor Eromosele was abducted alongside Emmanuel Akpan and Kingsley Emmanuel while his abductors demanded for N4m. He was brutally killed after the two workers escaped despite having deep cut on their body.