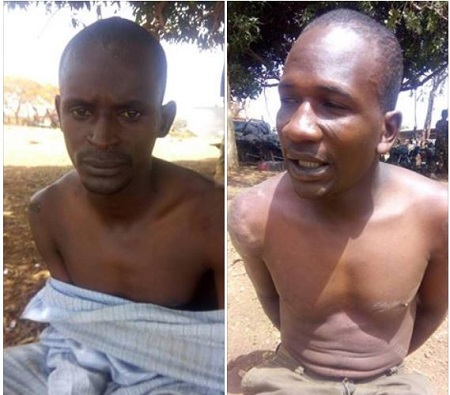 The two kidnappers after they were caught

Troops of the Mobile Strike Team II in Kaduna while on patrol around Rijana apprehended 2 suspected kidnappers. The suspects are still in the custody while investigation is ongoing.

In another development, troops of the 72 Special Force Battalion have restored peace in Otukpo, Benue State following an altercations that ensued after suspected cultists invaded a political meeting and opened fire. Members of the All Progressive Congress were holding a meeting in a hotel along Old Otukpo road when the armed men reportedly stormed the venue and started shooting sporadically. Two persons were killed and another was wounded.

Troops have dominated the general area with patrol to avert any breakdown of law and order.

Also, troops of 101 Special Force Battalion on clearance operation in Taraba State have continued to patrol Suntai and environs to deny armed bandits any freedom of action.

The Nigerian Army continue to appeal to members of the public to report any suspicious persons or movement to the nearest security forces for prompt action.

You are please requested to disseminate this information to the general public through your news media.