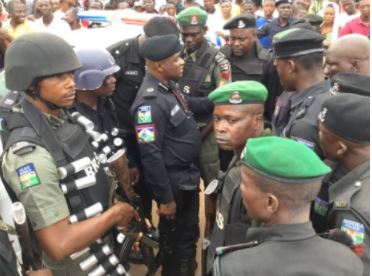 The Police on Monday arraigned a 27-year-old woman, Faith Michael, in a Karu Grade 1 Area Court, Abuja, for allegedly slapping and intimidating a police officer.

Michael was arraigned on a five-count, bordering on a joint act, obstructing public servant from discharging lawful duties, assault, defamation of character and intimidation, offences she denied committing.

The prosecutor, Vincent Osuji, told the court that one Seargent David Akoru reported the matter at the Karu Police Station, Abuja, on April 15.

He said that the complainant alleged that on April 14, the defendant with an unidentified man assaulted and intimidated him.

“While the complainant was at his duty post at CBN junction, Karu, Abuja, he intercepted a commercial motorcycle rider.

“The defendant who was a passenger stopped him from discharging his duties and alleged that the complainant forcefully demanded N50 from the motorcyclist.

“Before the complainant knew what was going on, the defendant brought an unidentified man, currently at large, who slapped him and intimidated him, boasting that they will remove his uniform,” Osuji said.

The judge, Hassan Ishaq, granted the defendant bail in the sum of N20, 000, with one surety in like sum and adjourned the case until May 18, for hearing.