Information Nigeriahttp://www.informationnigeria.org
Information Nigeria is Nigeria's No.1 Information Portal.
Members of MASSOB and Biafra Independence Movement took to the streets of Port Harcourt, Aba, and other South East, South South States to celebrate the Biafra anniversary, but some have been arrested while others are left injured. 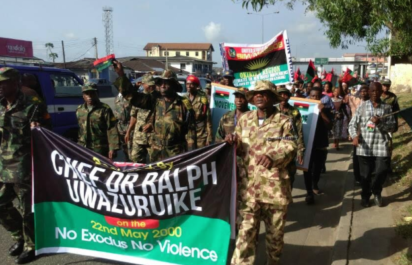 Some members of the Movement for the Actualization of Sovereign States of Biafra (MASSOB), totalling up to 50, have been reportedly arrested by operatives of Nigerian Police Force in Aba, Abia State.

According to a report by Vanguard, the MASSOB members were arrested at Osisioma Ngwa junction along the Enugu -Port Harcourt expressway when Police patrol teams numbering over 15 fired tear gas canister at them. 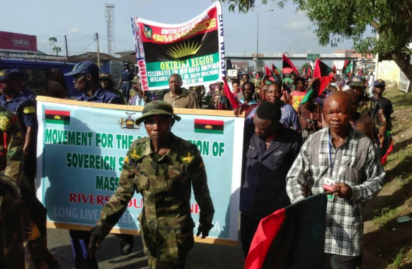 While speaking to a correspondent, MASSOB leader for Abia South zone, Fred Onyenaucheya, who condemned the arrest of the Biafra activists, insisted that MASSOB will not be cowed by the clampdown on its members.

He said, ”MASSOB is a non violent organization.We are shocked that Police could tear gas and arrest our members who were only celebrating the rededication of the new Biafra. As at now, over 20 of our members are receiving medical attention for injuries they sustained during the Police attack .

“Even our female members were not spared.We have about 50 MASSOB members arrested by the Police. 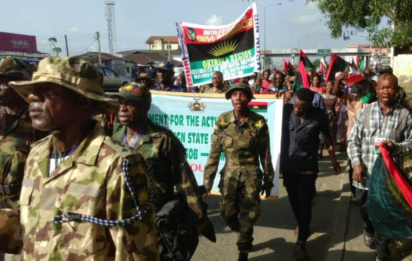 “This is a grave infringement of our right to freedom of movement. But we assure the Nigerian government that no arrest, detention or any other form of intimidation will stop us from actualizing an independent state of Biafra.”

He called on the Police to immediately release and apologize to the detained MASSOB members as they did not commit any crime.

Share
Facebook
Twitter
WhatsApp
Previous articleMeet Michael Nwokolo, A Police DSP With Unbelievable Stack Of Qualifications (Photos)
Next articleDrama As Popular Politician Is Locked Inside Town Hall By His Own People…You Won’t Believe Why
- Advertisement -