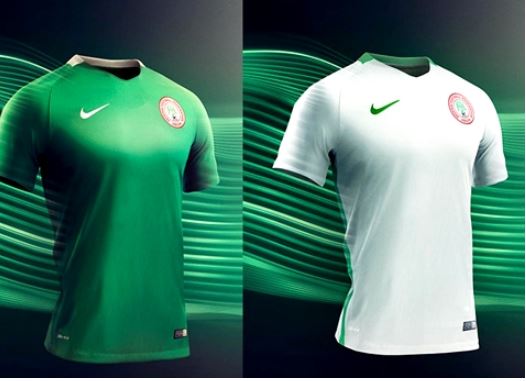 The prototypes of the Super Eagles jersey designed by Nike

American multinational corporation, Nike has apparently disclaimed the Super Eagles jerseys crested with its patent pass-mark logo which are widely in circulation in the local markets.

According to the sportswear giant, the jerseys designed with its latest Dri-FIT technology for the Super Eagles ahead of the 2018 world cup in Russia will not be ready for public consumption until June this year.

“The jersey has not been released yet, it is scheduled to be available in June. Also, there has not been an option to pre-order the jersey. Stay tuned to our site for updates” the company reacted to an inquiry made by a potential Nigerian buyer, Dotun Olusoga via Twitter. 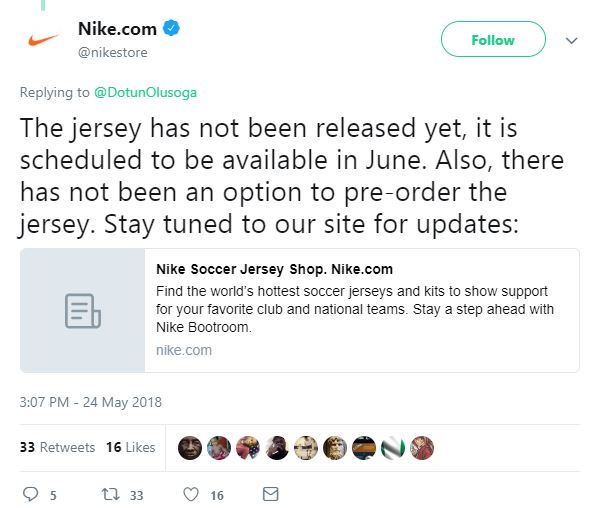 The revelation made by the company is in sharp and embarrasing contrast to a public announcement made by the Nigeria Football Federation on the 17th of May, 2018 via the same microblogging platform which reads:

Aside Twitter, a report on the NFF’s official website, www.theff.com details a meeting its leadership had with Nike’s representatives in Europe on the progress of the Nike deal and other future engagements.

The questionable statement made by the NFF had prompted Dotun Olusoga’s inquiry;

“I have searched the @Nike website and I can’t find a “Buy” button on the Nigerian National Team kit page. Where did this 3 million preorders happen?” 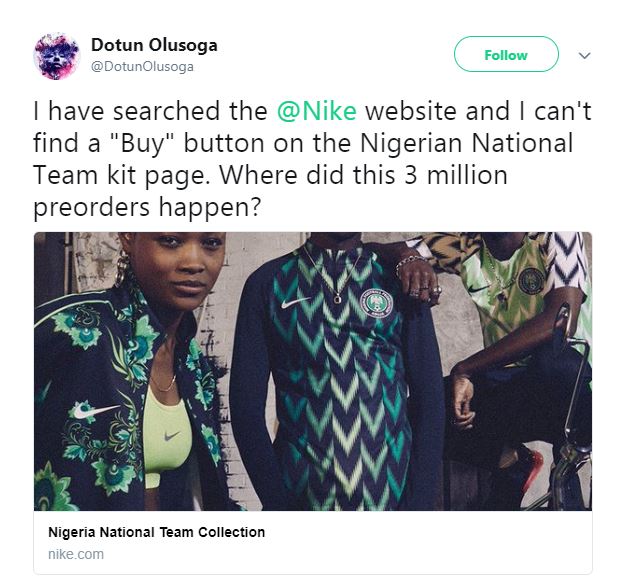 By implication, all the Nike Super Eagles jerseys in circulation as worn by thousands of Nigerians including celebrities are likely replicas except if they were obtained directly from the Super Eagles or individuals used in showcasing the jerseys.

It would be recalled that Nike unveiled the new Super Eagles jerseys on the 7th of February via its Youtube channels featuring prominent Nigerian footballers like Alex Iwobi, Mikel Obi, Oyinye Ndidi, Kelechi Iheanacho, singer Ayodeji ‘Wizkid’ Balogun and an unknown lady who modeled them in different colours.
On the NFF website, it was stated that the jerseys were going to be available on Tuesday, 29th May (tomorrow), at unit cost of $85 as revealed after a meeting with with the NFF chieftains namely the President of federation, Mr. Amaju Melvin Pinnick and the NFF 2nd Vice President/LMC Chairman, Mallam Shehu Dikko, who is also Chairman of the NFF Marketing, Sponsorship and TV Rights Committee at Nike’s Europe headquarters in Amsterdam, Netherlands.

The current designs bring back the nostalgia patterned Adidas jersey the Super Eagles wore at the 1994 Africa Cup of Nations in Tunisia and their first World Cup in the United States of America that same year.

The away kit has the shirt with the predominantly light green background with bold white V-shaped patterns drawn on it. The sleeves have white underneath black patterns. The shorts are plain white. The home shirt is all-green, this one darker than usual.