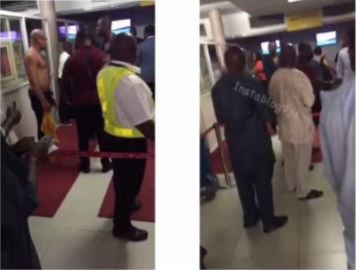 A video has shown the moment a man stripped half-unclad inside the Lagos airport after he missed his flight.

Local reports show that the man had missed his Air Peace flight from Lagos to Abuja and was so devastated by the development that he asked for a refund of his money. When he was refused the refund, he went berserk and stripped himself half-unclad.

The development caused serious drama in the place as people stopped by to see what the problem was. In the video, the man is seen shouting at the top of his voice, complaining to people about his dilemma.

It is not clear what later happened with the man.