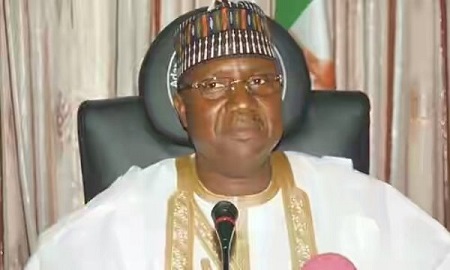 The Governor of Adamawa state, Muhammadu Bindow has apologized to members of his party, if he ever offended anyone. Bindow made the plea Monday at a stakeholders meeting in Yola to discuss the upcoming party congress.

“If I offended any of you here please forgive me. I didn’t do that deliberately,” he said.

Bindow urged stakeholders and other members of All Progressives Congress (APC) in the state to forgive him, if he wronged them.

The governor assured all the stakeholders that he has no candidate for the coming party congresses, and urged all those seeking positions to go and mobilize support.

“My administration is ready to work with all those elected in the congresses,” he stressed.

Bindow expressed satisfaction with the turnout of stakeholders from various interest groups in the state and urged for more unity in the party.

Speaking at the occasion, the Secretary to the Government of the Federation (SGF), Mr Boss Mustafa stressed the need to abide by the party guidelines for hitch free congresses.

“We are one family and must not allow internal political bickering to affects our party in the state.

“We won in 2015 general election and shall win in 2019, but we need to create a situation that would make it much easier for us to win again,” Mustafa said.

In his remarks, the APC National Vice Chairman North East, Alhaji Mustafa Salihu, lauded the stakeholders for putting aside their differences to attend the meeting and urged contestants to show sportsmanship.

“We must work to retain government at all levels; we need to put all our personal interests aside for our party,” Salihu said.

The News Agency of Nigeria (NAN) reports that former SGF, Babacir Lawan. who also attended the meeting however criticized the meeting for not discussing the issue of zoning ahead of the congresses.

According to him, the APC constitution promotes zoning of positions particularly in diverse states like Adamawa and wonder why the issue was not discussed.