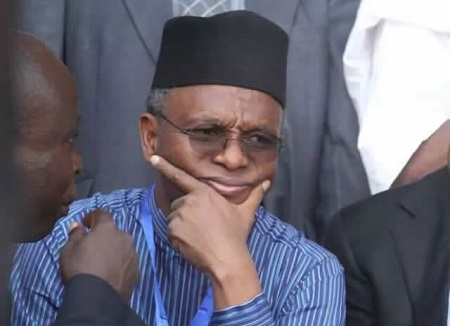 Governor Nasir El-Rufai of Kaduna state has dismissed the fears that Buhari’s electoral value would diminish if the aggrieved members of the nPDP pull out of the ruling All Progressives Congress government.

In an interview with State House correspondents in Abuja on Tuesday, El-Rufai said President Buhari would be re-elected, with or without the threatening former PDP members.

“I don’t agree and I want to go back to 2003. What are we talking about? Who are these new PDP people that are threatening? This is Kwara, Kano, Sokoto, Adamawa, Rivers but I don’t think Amaechi is part of them.

“And, I have no doubt in my mind that even if the people threatening to leave, leave, it will have absolutely no impact on the presidential elections, the president will win Sokoto, Kwara and Adamawa easily.

“Kano is already in the bag, I mean if you saw the crowd that welcome the president without the former governor Kwankwaso, Kano has always been the president’s base.

“To me that is not the issue, the issue is that they have written, they have expressed grievances, some of the grievances are legitimate and should be looked into.

“But to threaten to leave the party is neither here nor there. If they are honest with themselves they know that President Buhari will win those states with or without them.’’

El-Rufa’i visited the State House on Tuesday to update President Buhari on the outcome of last Saturday’s Local Government elections in his state and the use of electronic voting system during the exercise.

It was the first time a state adopted the use of electronic machines to conduct elections in Nigeria.

El-Rufa’i told journalists that he also used the opportunity to welcome the president from his recent trips to America and London.

The governor recommended the adoption of e-voting in future elections at both federal and state levels as a panacea to election frauds in the country.

“Absolutely, I recommend it highly to everyone, I have already offered to my colleagues state governors that are yet to conduct local government elections that they can come to Kaduna and we can give them the machines on mutually acceptable terms.

“All you will need is to change the software, it will have the logo of the state and the number of parties active in the state, they can use it. It is easy.

“At federal level, I will recommend it as well because with the card reader and the electronic voting machine, the era of rigging elections is almost over and I think that is when people will have confidence in the process and will come out enmass to vote for their leaders.

“Having said that, I know we have been working on this for about one year before we got to where we are. Although it is possible for INEC to do it, it will be logistically difficult.

“But nothing stops them from trying if the resources are available. Because, the machines have already been manufactured, the designs are there, you only need to place the orders to the Chinese and I’m sure they will deliver them in no time.’’

El-Rufa’i also dismissed the assertion that the use of e-voting was against the Electoral Act, saying that, “I don’t agree with that”.

“There is an amendment to the Electoral Act that President Jonathan signed a few days before he left office which legitimizes the use of the card reader and other electronic systems for voting.

“So, in my view the current Electoral Act has provision for the electoral voting.

“But, that is not even what we used in Kaduna. In Kaduna, we enacted our own electoral law that made provision for the electronic voting machine and card reader, everything was totally legitimized and passed by our State House of Assembly and I think every state can do the same,” he said.

He added that the current legal framework allowed the use of electronic voting machines.

Share
Facebook
Twitter
WhatsApp
Previous articleCheck Out The Winner Of Miss Imo State Queen International 2018 And Her Car Prize (Photos)
Next articleDidn’t You Also Steal the Presidency and the entire Treasury in 1983? FFK Blasts Buhari
- Advertisement -Ad ==> Discover how a young Nigerian graduate now makes a consistent 40k per week doing a legitimate online business. You too can start yours now, click here!!!