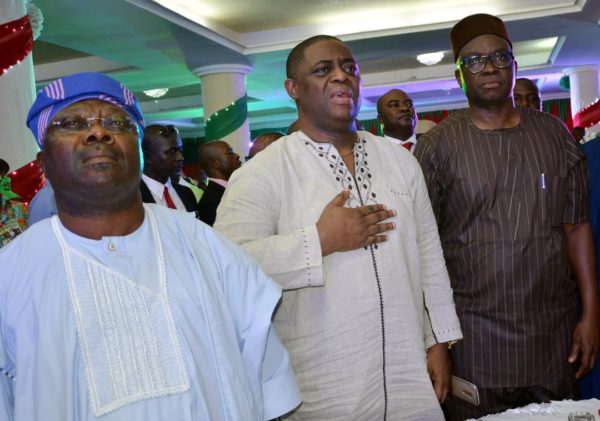 Omisore, Fani-Kayode, Fayose at an event

Chairman of Peoples Democratic Party (PDP) in Osun, Mr Soji Adagunodo, says Sen. Iyiola Omisore has not left the party as being speculated.

Adagunodo told newsmen on Thursday in Osogbo that as far as PDP in Osun was concerned, Omisore was still a member of the party as he had not tendered a resignation letter to the party.

“If anybody of high profile like Omisore decides to leave the party, he will tender a letter of resignation.

“When Oyinlola left the APC, he wrote a letter to notify them of his resignation from the party, which was honourable; so if Omisore wants to leave the PDP, he will equally tender a resignation letter.

“So as far as the PDP in Osun is concerned, Omisore has not resigned from the PDP,” he stated.

On what will become of PDP in the state without Omisore, Adagunodo said that the party belonged to God and that whatever would happen to the party would be determined by Him.

He said the party did belong to one man and that days were gone when a sole candidate was produced without contest in the party.

According to him, if Omisore wants to run for governorship, he should contest with other aspirants.