An upstate couple got so fed up with their unemployed 30-year-old son’s refusal to leave the nest that they finally sued to evict him — and won.

Mark and Christina Rotondo were forced to the extreme-parenting measure after giving their layabout millennial boy Michael cash for moving expenses, pleading with him to get on with his life and finally sending written legal notices demanding he grow up and move out.

“Michael, After a discussion with your Mother, we have decided that you must leave this house immediately,” reads the first letter, dated Feb. 2.

It concludes: “You have 14 days to vacate. . . We will take whatever actions are necessary to enforce this decision.”

They later offered him $1,100 to “find a place to stay” and gave him parental advice including, “organize the things you need for work and to manage an apartment” and “sell the other things you have that have any significant value.”

They even implored him to start making money. “There are jobs available even for those with a poor work history like you. Get one — you have to work!” the Rotondos wrote.

But nothing moved Michael from his epic failure to launch — that is until an equally fed-up judge’s ruling Tuesday forced him to accept adulthood.

“It’s really unfair to me and really outrageous,” said the son — a self-described “businessman” who has a young boy of his own, of whom he lost custody.

“I really don’t want to stay there,” he told The Post from a bus after his life-altering court loss.

“I’ve been trying to leave there for a long time. They stopped feeding me, they cut me off the family phone plan.”

Asked if he thought mom and dad were merely trying some tough love, Michael sounded like a child who’d just been punished.

“I don’t think trying to destroy somebody is tough love,” he griped.

The bizarre family feud boiled over May 7, when mom, Christina, filed suit in Onondaga County Supreme Court seeking to evict Michael from their modest residence in Camillus.

The stubborn son — who turns 31 in July and has lived at home for the past eight years — had declined to go even after a series of eviction letters they sent him between Feb. 2 and March 30.

Each was signed coldly, “Mark and Christina Rotondo.” 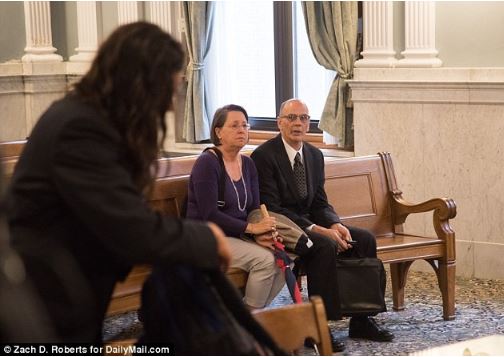 “You have heretofore been our guest and there is no lease or agreement that gives you any right to stay here without our consent,” the notice reads.

When they offered their son cash in a letter sent later in February, he actually took it, but used it to pay bills instead of move, Michael admitted.

In the final letter, dated March 30 the parents say they will even pay to fix his broken Volkswagen Passat.

But Michael only dug his heels in further after his mom sued.

Acting as his own attorney, he filed a motion to get his parents’ case tossed by claiming they were legally required to give him six months to get out.

On Tuesday, Judge Donald Greenwood ordered the parents’ lawyer Anthony Adorante to draft an order outlining terms of the eviction but allowed Michael to remain at the home until an official eviction date is set, the son said.

Greenwood applauded Michael for his legal research in the case — but blasted his demands for six more months as “outrageous,” according to Syracuse.com.

Michael said he resides in a bedroom located near his mom’s master bedroom in the Weatheridge Drive home, while his dad mostly stays in the basement.

“It’s not that big of a deal. We just don’t communicate,” he said on his ride back to his soon-to-be-former home.

In court papers, he said he runs a “successful” business but declined to say what it is.

“I have money. I have income,” Michael insisted. “I have plans to not stay with them anymore — just not today, just not in 30 days. I can’t imagine I’ll be there in three months.”

He also claimed that his parents are forcing him out as “retaliation” for not allowing them to see his child before he lost custody himself last September.

However, he said he’d comply with Adorante’s order so long as it doesn’t force him out within the next 30 days.

“I want three months. I think that’s reasonable,” he said.

He said he briefly saw his parents once he got home Tuesday.

“They were quiet. It’s awkward,” he said.

Asked whether he was hurt by their drastic measure, he said, “They’re very much a moot point to me. Right now, I’m just worried about what’s best for me.”

His parents couldn’t be reached.

In 2017, Michael sued Best Buy for $338,500 for firing him two years earlier for not working Saturdays. That case is still pending.