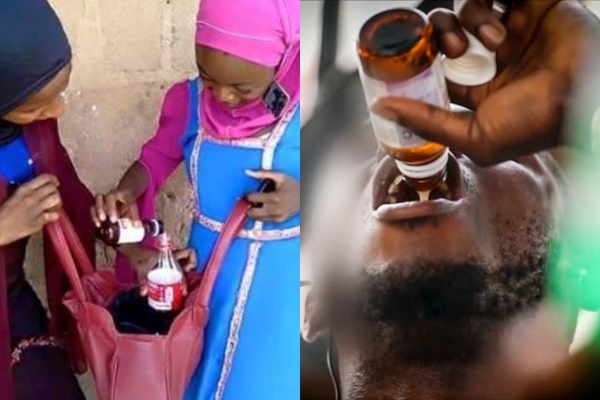 Following a recent documentary on prevalent Codeine abuse by young Nigerians the British Broadcasting Corporation (BBC), the Federal Government put a ban on cough syrups that contain Codeine. NAN spoke to some drug abusers in the Federal Capital Territory, Abuja, and according to them, depression, financial instability and peer pressure were some of the reasons for their addiction to some substances.

Why they do it

The younger respondents stated that they took to the habit due to increased peer pressure, adding that it increased their level of acceptance by helping them blend into desired societal groups.

How they abuse drugs

They listed Marijuana, Cocaine, Refnol and Codeine as constantly abused drugs, with Alcohol, Gins, soft drinks and Spirits acting as mixers for the drugs.

Respondents said that banning Codeine would have minor effect on drug abuse prevalence; alleging that it would increase the ‘black market’ value of the drug substance.

What some substance abusers had to say

Ifeanyi Akachukwu(28): “You know, it is difficult to drop a habit that gives you so much peace. When my father died during my undergraduate years, I picked up the habit of smoking. “I started smoking cigarettes but as the pain and pressure I felt increased, I needed something stronger to numb the hurtful feelings, and Marijuana became an instant solution.”

Mr Callistus Imiojo (46): “I started smoking Marijuana four year ago when I lost my business and could not fend for my family; I also tried codeine for a while. “We could not feed and I felt less than a man, all my esteem stripped away by the pressure and shame. “I needed an escape and drugs helped. My business is back now but I cannot stop, although my abuse is beginning to reduce.

Angela Obuh (19): “I don’t find anything wrong in taking Refnol or Codeine because all my friends do it and you don’t want to be the odd one out, I didn’t want to take anything because all the stories that older people had told me about drugs and they (her friends) laughed at me. I tried it and the drugs really make you feel good. “I don’t think I can hang out with people who don’t want to get ‘high’, they are boring. I am young and this is the time to do all these things,” Obuh.