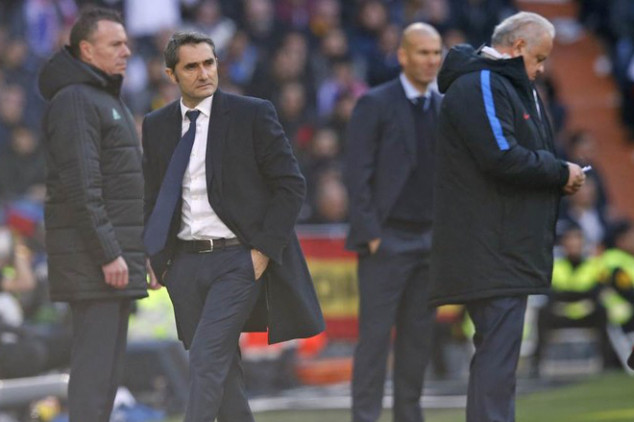 He won his last meeting with Los Blancos 3-0, but that has not always been the case in previous encounters.
Sunday will see Barcelona host Real Madrid in the latest edition of El Clasico. While this encounter is different from previous seasons, as the title has already been won, an exciting affair can still be expected.

Ernesto Valverde will be keen on beating Los Blancos for a few reasons, mainly avenging the 3-1 home defeat in the Spanish Super Cup and maintaining their unbeaten run. However, if the Blaugrana wishes to end the season without a single defeat, their manager overcome is poor record against the 12-time Champions League winner.

The Camp Nou boss tasted sweet victory in his team’s last encounter with Zidane’s men, winning 3-0 at the Bernabeu. Unfortunately, the two defeats across both legs of the Spanish Super Cup added to his unflattering tally against Los Merengues.

As a manager, he has not lost more games against a single club than Real Madrid – tied with Barcelona at 15 defeats. His awful tally against his current employers came after 27 meetings while his record against the Madrid giant is from 23 encounters – four fewer games.

In those 23 run-ins, his teams have conceded a whopping 48 times while only scoring 27. Additionally, Valverde has only beaten Real Madrid six times as a manager.

At the Catalan giant, the 54-year-old is faring well after an early scare. He has already sealed the league and cup double and beating Cristiano and Co. for the second time in La Liga this season will be the cherry on top of the cake.

Zidane is yet to lose at Camp Nou in three visits, winning two and drawing the other. Ernesto will wish to improve his track record against the Bernabeu side, and winning on Sunday will be the perfect way to do that.