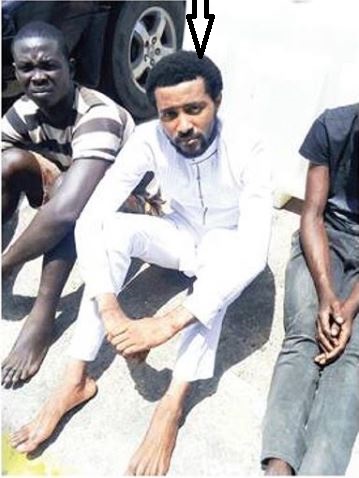 Pastor Chris Mordi on white dress alongside other suspects

The face of the 35-year-old pastor, Chris Mordi, of the Miracle of Fires Ministry, Langbasa, Ajah, Lagos State arrested for allegedly propagating hate speech in the state has been revealed.

According to the Commissioner of Police in the state, Edgal Imohimi, the suspect was arrested on May 5 at Ado Road, Langbasa area of Ajah in Lagos.

Edgal said that the Pastor was arrested allegedly while in possession of an inciting publication titled: “Beware of Catholic Women Organisation and Knights of the Catholic for they are occultic.”

He said that the pastor had invited his church members for a programme where he was to make a public pronouncement on the issue before the publications were intercepted on May 5.

“This is a case of insult to religion and propagation of hate speech which contravene Sections 124 and 168 of the Criminal Laws of Lagos State 2015.

“This should be a lesson to be imbibed by all religious leaders. We must encourage and preach religious tolerance,” he said.

He said that the clergyman would be charged to court for alleged hate speech and religious intolerance.