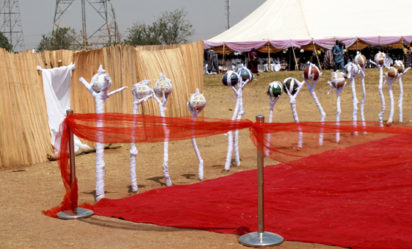 An order from a Nigerian traditional ruler forbidding women from being in public during a festival this week has sparked a lively debate over gender in the economic capital Lagos.

Oba Kabiru Adewale Shotobi gave notice of the Magbo festival in Ikorodu, warning that on Oro day “all female(s) are forbidden to be seen outside their homes or move around the town”.
Ikorodu was once a small Yoruba kingdom but rapid urbanisation in recent decades has seen it become swallowed by Lagos, which prides itself as Nigeria’s most progressive city.

Now the bustling suburb finds itself at the crossroads between powerful ancient customs and modern sensibilities.

The announcement went viral online and was criticised in some quarters as sexist.

One political pundit wrote on Twitter: “This is Lagos, Nigeria’s most ‘liberal state’. Nigeria is a very backward society.”

Reflecting the sensitivity of the issue, the Lagos state police met the Oba — king in Yoruba — following outrage over the ban.

During the meeting, he expressed shock that a man of his “exposure” would be seen as doing anything sexist, according to a police statement on Monday.

The monarch said the festival was an “age-old tradition” yet ultimately decreed that “the festival would hold without denying the female folks their right of freedom of movement”.

But while his words placated some, in reality the festival went on as it has for many years: women and children stayed indoors, according to local media reports.

According to Yoruba custom, women and children should never see the oro, a male deity who is considered “sublimely sacred”, priestess Adedoyin Talabi Faniyi told AFP.

On Oro day in 1999, a woman from the Hausa ethnic group ventured out into the street, triggering a brawl between Yorubas and Hausas that left over 50 people dead.

Oro is feared in Nigeria’s southwest, which is home to some 40 million people, most of them Yoruba, and where traditional beliefs are practised alongside Christianity and Islam.

“Women are not allowed to move around during the Oro festival because that is how it has been since the beginning,” Faniyi said.

“This festival goes around Yoruba towns from one place to another.”

Women are supposed to honour the goddess Majowu, who is married to Oro and ensures marital bliss in the sometimes polygamous society by frowning on women “misbehaving” out of jealousy, said Tempolife, a Nigerian weekly magazine.

But Oro is particularly scary because he is known to demand human sacrifice, a practice at odds with Lagos’s desire to market itself as an African megacity of the future.

“The media also know what is involved in the Oro festival. The churches and mosques and their leaders know,” wrote Azuka Onwuka, a columnist for The Punch, a daily newspaper.

“They know that human sacrifice is sometimes involved in it,” Onwuka wrote on Tuesday. “But everybody keeps quiet and pretends there is nothing wrong with it.

“How can it be explained that in the Lagos of 2018, which prides itself as Nigeria’s only megacity, that there is a cultural practice that not only prohibits the movement of women and strangers but also is touted to involve human sacrifice?”

Tradition and modernity often clash in Lagos, a city home to 20 million people from Nigeria and beyond.


When President Muhammadu Buhari shut down the city for his first official visit in March, as he does in other cities around the country without incident, both male — and female — Lagosians were incensed.