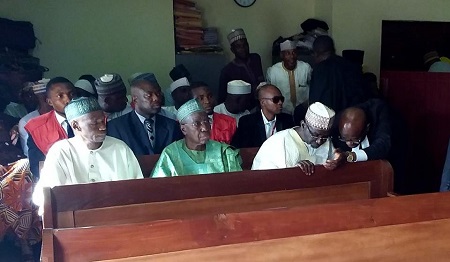 Former Kano State governor, Ibrahim Shekarau, Ambassador Aminu Wali and Engineer Mansur Ahmed are currently being arraigned before a Federal High Court in Kano for collecting N950 million campaign fund which is part of the $115 million allegedly distributed by former Minister of Petroleum Resources, Deizani Alison-Madueke ahead of the 2015 general election.

This comes after the Economic and Financial Crimes Commission (EFCC) filed six-count charge bordering on the money laundering.

The first and second charges were on Shekarau and Wali for collecting N25m each out of the N950m, while the third was on Engineer Ahmed, who allegedly collected N10m. The fourth charge was on Wali for collecting the N950m, the fifth on Shekarau and Wali for retaining N950m at the residence of the former in Kano and the six on the three of them for conspiring to collect the money.

The former governor and the two other persons were invited by the antigraft agency in May 2016 for allegedly sharing N950m campaign fund at Shekarau’s residence in Kano.