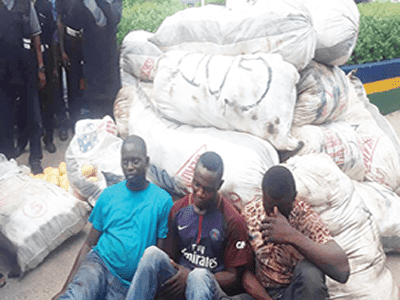 The Lagos state police command has arrested a man named Gafar Ademolake for allegedly smuggling Indian hemp worth N10million into Nigeria from Ghana. . The 38yr old who claimed to be a graduate of International Relations, Unilag, said he took to the business when he couldn’t get an employment after graduation. .
He explained that after his graduation and NYSC, he waited for about three years at home, doing nothing, before a friend, who was already into the business, introduced him to it. .

collected:
“After thinking about the business, I decided to try it. I first invested N200, 000 and made a whooping profit of N100, 000. In the past three years now, I have never looked back. I have made a lot of money.” .
According to the Newtelegraph said that before his arrest, he had just recently invested N10m and had already wired the money to the courier called Iya Ghana, living at Mile 2, area of Lagos. .

He noted that if he had secured a job after graduation, he wouldn’t have ventured into the drug business. He also admitted that the incredible profits from the drug business, made it difficult for him to continue searching for a legal job. .

He said:
“I regret my action. But I wanted to take my family away from poverty. That was why I decided to heed my friend’s advice and go into the drug business. I needed to survive. .
Police tracked me through my phone after two drivers, who had gone to bring the Indian hemps for me from the warehouse were arrested by at the Ojueleba area. This is the first time I have been arrested since I joined the business.” .
When asked what he had achieved since he started the business, Ademolake said:
“I have built two houses, and I have a car. I’m comfortable.”
The police said he will soon be charged to court after full investigation.