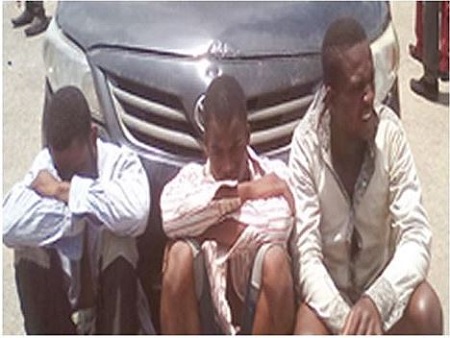 The driver caught with his gang members

A 42-year-old driver, John Ololo, has revealed that he and his partners in crime used to give stranded ladies lift in order to rob them, a report by NewTelegraph has revealed.

While confessing, Ololo said he used the money made from the robberies to augment his monthly salary.

He was arrested alongside his gang members, Augustine Emmanuel (21) and Anayo Oluchwku (25). Police said that the gang used to rob ladies returning from clubs of their phones and other valuables.

After Ololo conceived the idea of using his company’s car to rob, he recruited Emmanuel and Oluchukwu. Whatever money made during operations was shared equally.

He said: “My boss usually allows me to take the car home because of where I live.

There was always the need to drive to my boss’ home to pick him on time, so that we can get to office early. I have been taking the car home for about a year now.

My boss allows me to take it home because of trust. Sometimes, when I’m going to the office, I pick passengers along the way. Our modus operandi is to dress well and go to any club. After clubbing, we would offer ladies free ride; we usually pick two ladies. Once they enter, one of us would bring out a toy gun and threaten to shoot them. We would dispossess them of their valuables.

“I have collected many phones from ladies since I started this operation. My monthly salary is N65,000. Unfortunately, the salary is not enough. That was why i decided to use the car to rob.

The money I make from robberies is to supplement my salary.” Oluchkwu said that it was Ololo who provided the two toy guns they used for their operations.

He said: “It was Augustine who contacted me that someone has brought an idea that would fetch us money. When I heard the idea, I bought into it, because I was jobless.”

When Augustine took me to Ololo, he explained how we were going to go about the operation. Ololo promised that whatever that comes out of it, would be shared equally.

Unfortunately, last Saturday, we were returning from one of the clubs when policemen arrested us at Lekki roundabout.” Augustine said: “When Ololo brought the idea, I didn’t know we would be arrested so soon. It was greed that made me to follow him. I have not been involved in robbery before.”