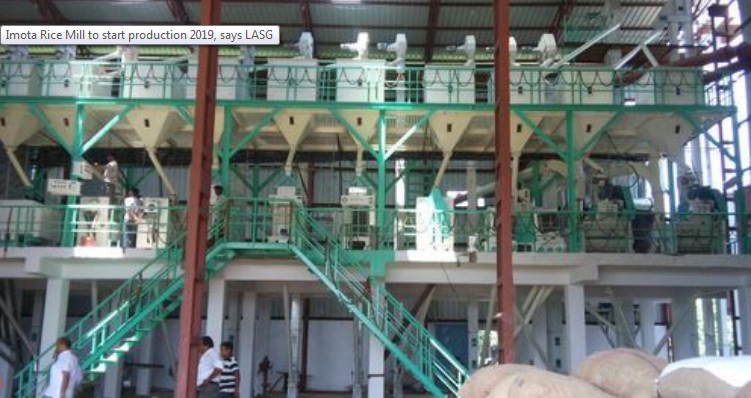 The Lagos State Government on Wednesday said rice production would start at the Imota Rice Mill in Ikorodu by February 2019, with a production capacity of 32,000 tonnes per hour.

The Commissioner for Works and Infrastructure, Mr Ade Akinsanya, disclosed this during an inspection tour of the mill alongside other members of the State Executive Council.


Akinsanya said that the entire area, covering 8,000 square metres, with a light industrial park, would create jobs for 250,000 people.

He said the Rice Mill would also have a warehouse to accommodate 20,000 metric tonnes of rice.

According to him, rice, in large quantity, will be available to residents of the state and other South-West states early next year, as the state government is stepping up work at the mill.

The News Agency of Nigeria reports that the team also inspected the ongoing project at the regional food market in Imota, where the Mile 12 Market and other markets in the environs would be relocated.

Akinsanya said that the market would accommodate 5,000 stalls, 1000 capacity trucks and trailer park, with the first phase at 75 per cent completion.

He said that the entire project was slated for delivery in September this year.

NAN reports that the executive members also inspected ongoing work at the 2.7km Agbowa-Timberville road and the Timberville, where the saw millers at Oko-Baba, Ebute-Metta, are to be relocated in October.

The traditional ruler of Ikosi-Ejinrin, Oba Aderibigbe Asunmo, commended the efforts of the state government on the Odo Onosa/Ayandelu Housing Scheme.