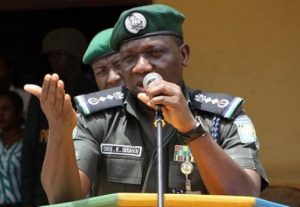 Liberty Television reporter,  Aminu Nurudeen who is said to have published a video of Ibrahim Idris, inspector-general of police (IGP), struggling to read his won speech at an event in Kano has gone into hiding.

In the video  recorded at the inauguration of the Police Technical Intelligence Unit in Kano state on Monday, Idris was heard saying

The video clip which has since gone viral on social media has earned the IGP mockery from Nigerians that saw it – Altough the police have said that the video was doctored.

Quoting sources, the newspaper said the IGP’s blunder brought an abrupt end to the event. “He has however ordered an investigation into the leakage of the video but we are watching to see how he intends to deal with the individuals behind the viral video without further embarrassing himself and the force,” the newspaper quoted a source as saying.