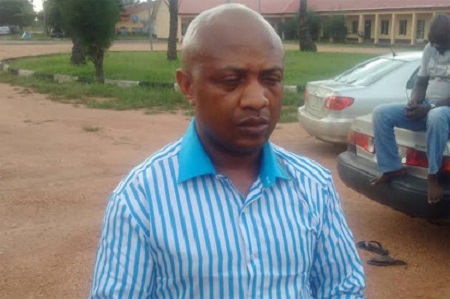 Kidnap kingpin, Chukwudumeje Onwuamadike aka Evans, appeared at a high court in Igbosere, Lagos, on Monday. The billionaire Kidnapper who has been in Kirikiri after he was arrested by police last year did cause a little drama at the court premises.

Evans refused to alight from the ‘black maria’ which conveyed him from the prison to court and Adedayo Akintoye, the judge, had to order that Evans be bundled in. While inside, Evans signaled the judge that he needed to speak. The judge acknowledged him to speak and Evans said: “I have an explanation to make. Since I have been in the maximum prison, they have been maltreating me; no visit, they don’t feed me well, I have eye problem and I can not see afar.”

However, a prison officials opposed him, saying he was being treated well and that a doctor still visited him recently but the suspect said he was only seen by a nurse.

The judge asked the prison officials to treat him well, emphasising that Evans had not been convicted. The judge stood down the case but as soon as he rose, Evans broke down in tears, saying:

“What have I done to you people? They have been beating me; no good food; I have been locked up in one place since last year; why are they taking my case personally? Why do you people want to kill me.”

Evans, who is facing charges bordering on kidnapping, had complained of being starved in detention before, but Rotimi Oladokun, spokesman of the Lagos command of the Nigeria Prison Service (NPS), denied the allegation, saying Evans was being fed like other inmates.

“It was misinformation on his part. He has always been treated like any normal prisoner. He is well fed and well taken care of with all the amenities provided (for him). He has access to medical facilities and everything. He is being treated properly. It is not true that he was not given food for five days. Every inmate is entitled to three square meals daily”