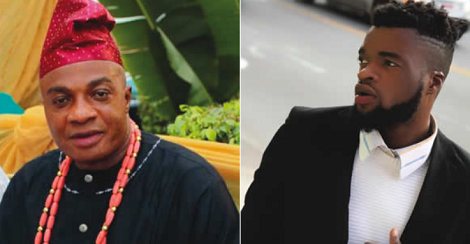 Tell us about yourself.

I am Ridwan Oloyede. I was born in Abeokuta, Ogun State, where I completed elementary and primary education until my family moved to Lagos where I completed secondary school education. I later studied Information Technology at the University of Lagos. I live in the United States where I am pursuing a music career in New York.

What are your recollections growing up with your father?

Growing up with my father was really a broad range of experiences. I had lots of low and high-up moments growing up. I remember sometimes when I couldn’t go out without people pointing at me and whispering, “Hey, look at him, he’s Olaiya’s son”; or some of my father’s fans asking me random questions about him.

Well, on the bright side, I enjoyed the fact that I was born into such a family because I got exposed to a lot of things about the industry and its practitioners.

Your father cuts the picture of a humorous person especially as he plays comic roles. Is he also the same at home?

My father is naturally comical to the point that he acts as if he’s in front of the camera even in the bathroom. He is a very hilarious man.

Can you recall any funny memorable moment with him?

The funniest moment was when we visited one of his friends’ house and they let loose their dogs. He ran like the retired Jamaican sprinter, Usain Bolt. Well, I did too and I am guilty as well. We don’t get close to dogs.

Does he use the cane to enforce discipline?

He never uses the cane on his children especially the females. But being the son of the house, he wouldn’t hesitate to give me a slap if my brain needs to reset for any misdemeanour.

Can you recall anytime he disciplined you and what you did wrong?

My father never used the cane on me like I said earlier. He never uses the cane on his children but there was a time I messed up and I got a slap for that. The way he disciplined me has made me a better person today.

What are his views on Nollywood especially the Yoruba genre?

Basically, his vision for Nollywood in general; especially Yoruba genre can’t be matched. He tries to envision a better future for the industry but for some reasons, bad eggs won’t let a man with a vision handle it.

Why didn’t you go into acting like your father?

I am a musician. Besides, my father doesn’t want any of his children to go into acting because of the way the industry is at the moment. Also, I am a man of my own and I can decide to go into acting. I only have to do better than he did.

How does he manage his female fans?

It comes very easy for him managing his female fans. He is a charismatic man and he tries to treat all his female fans equally. He respects my mother enough to know that female fans can only remain fans from a distant and no drama is ever involved.

What are his regrets?

I believe my father regrets not being able to complete his university education at a young age.

How has he been able to stay off scandals?

He has been able to stay off scandals because he keeps his circle of friends small and he has a loving and supportive family. Besides, he’s never been involved in any shady business because he is a disciplined man.

Your father has acted in many movies. Which of them do you like most and why?

Let me say my favourite of his acting is in Ile Alayo. This is because I couldn’t believe my father could play a role as an Igbo (hemp) smoker or drug dealer. He plays the role so well one would think it is his lifestyle. The movie is not his, but he played a big role in it. It’s my favourite, but not necessarily my favourite movie of him.

Did he tell you the story of how he started acting?

He told me what I needed to know about his career. He explained he started as a TV personality at the Nigerian Television Authority where he acted stage plays with his contemporaries. It was later that he advanced to the home videos.

What is his favourite food?

His favourite food is eba.

What is his favourite drink?

He takes water a lot.

Does he do any exercises?

He does exercises mostly on the treadmill.

Does he have any preference for any music?

Yes, he does. He enjoys the music of Wasiu Ayinde and Michael Jackson.

Who are his friends?

His family and relatives are his most prestigious friends.

How does he react when angry?

He knows how to control his anger whenever there’s an aggravating issue directed at him. He reacts with diplomacy. Though no one is perfect, I have not seen him get out of control when he’s angry.

What are you most proud of about him?

I’m proud of him for being able to pull off a massive movie project which he shot in both English and Yoruba simultaneously on the same set with the same cast. No one has done that in the industry yet, but he did without doubting his own vision.

Have you ever acted together with him?

Yes, I acted together with him in a movie titled, Ololade Mr. Money, which he produced.

Your father has an appellation, Olaiya Igwe, which he earned from students of the Obafemi Awolowo University. Do you call him by the name and how does he respond to it?

I am not allowed to call him by his appellation. We are a typical family where we address our father as daddy.

What are his likes and dislikes?

He likes nice clothes and shoes and he has good eyes for beauty. He likes to be respected and he’s reciprocal too. He loves to sing when he’s happy. He also likes to have people around him and to be the centre of attention. He dislikes cold food, disloyal and disrespectful people.

How do people relate with you knowing you are his child?

It depends on the kind of people. Some treat me with respect and honour, while some people act jealously towards me. It’s always a mixed reaction from different people.

How large is his family?

My father has six children. It’s a pretty large family.

Did you enjoy preferential treatment from teachers and school mates when you were studying in Nigeria?

I always kept a low profile in all the schools I attended because I wanted to be loved for who I am, not for who my father is. But one way or the other, they would get to know about my father and started acting differently either positively or negatively. I know that once they know who my father is, something would change in the way they relate with me.

What career would he have chosen if he is not an actor?

He would have been a lawyer.

Why do you think he would have been a lawyer?

That’s the profession he told me he would have chosen if he’s not an actor.

How does his name open doors for you?

With his profession, he has top-notch friends in high places in different disciplines; so, I find doors easy to open. Sometimes, I decide to take the hard way out and do it myself to gain more experience from the other side of life.

There was a time he planned to return to school. Did he eventually realise the dream?

Yes, he did to some extent. But he couldn’t complete it because he was more devoted to his stage craft and his attention and service were always needed in the industry and society. That has kept him on his toes.

His love for Mercedes Benz, SUVs and Range Rover is deep.

What do you think are his contributions to the nation’s movie industry?

He has been able to raise the bar on movie production in the industry by producing educative movies that speak to everybody. This makes many aspire to go into the movie business to learn and grow their passion in order to contribute to the nation’s economy.

What do you think he would want to be remembered for?

He would want to be remembered as a great father, a husband, a brother’s keeper, a vibrant citizen, a great movie-maker and an actor.

How does he settle disagreements with his wife?

Most of the arguments end before they snowball into big situations because he applies morals and exhibits a high level of maturity, patience and respect for himself and wife. No one is perfect as there are sometimes situations get out of hand, but they don’t go past the bedroom.

How does he relax?

He’s definitely the type to jump to bed and sleep when he needs some real relaxation. However, he finds a lot of comfort among his peers whenever they gather to share ideas, eat and laugh their worries away.

Where does he take his family to for bonding?

He loves to go out of town with family for short vacations if time permits. Most of the time, family bonding takes place in the house because he is a busy man