Ruth Okafor, a female Nigerian referee, has gotten praises from around the county after she saved a player’s life during a football game.

The referee from Lagos, Ruth Okafor saved the life of a player, Jennifer Osawaru, in the Nigeria Women Premier League Week 6 encounter between Sure Babes FC of Ilorin and Edo Queens of Benin City, in a match played at the Kwara Sports Complex, Ilorin.

As a way to appreciate her effort, she was rewarded with a cash of N50,000 by the vice president of the Nigeria Football Federation, Barrister Seyi Akinwunmi, for her quick action and bravery. 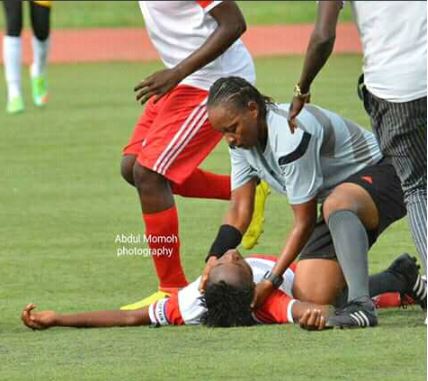 Edo Queens player, Jennifer Osawaru, was hit by the ball and went unconscious and it was visibly down to Referee Ruth to act, she quickly kept Jennifer warm and kept her in the recovery position, while directing other frightened players away from the distressed scene.

The 28 year old referee from Lagos will also be recognised with a Special Award for Courage/Fair play by the organisers of the “Naija Women Football League Awards.”

The NFF Vice President said he was impressed with Ruth’s bravery and thought there was a need to reward her, so she can do more and be better with her job.