Home Entertainment Nigerian lady stranded at a restaurant after she ordered what she can’t...
Facebook
Twitter
WhatsApp

A Nigerian lady stranded at a restaurant by a Nigerian guy after she ordered for a meal she couldn’t pay for and she was also rude to him.

The guy shared the story.

According to him, his date had the highest price for the food they’d ordered and after their meal, he asked that she foot the bills cause he was a little cash strapped and was not with his debit card.

This was when things took a dramatic turn… the guy said the lady became rude to him and asked ‘why would she pay for his food?!’… Cool with this, the guy jejely paid for his own food and left her to pay for hers.

Read his narrative below:

Next thing she said “Why will you even expect me to pay for your food? Who does that?” with an angry face.
Didn’t know whether that was a threat or something but I just called the waiter, paid for mine N3,450 💳 ordered an UBER and left. 🚶🏽‍♂

Everything she ordered for, I’ve never heard of them before but that’s none of my business. Few minutes later she called me that she didn’t know I would take her statement serious, she is sorry and that she really doesn’t have up to N5,000 with her…

…how can I just leave her and walk away. Oh well, ladies should learn to order what they can pay for and even if you can’t, DON’T BE RUDE like you own the man.

“WHY WILL YOU EVEN EXPECT ME TO PAY FOR YOUR FOOD?”

Oh really, but you expect me to pay for yours?” 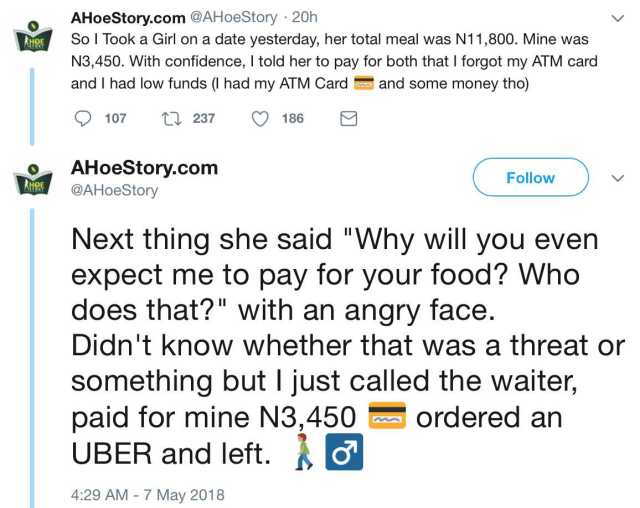 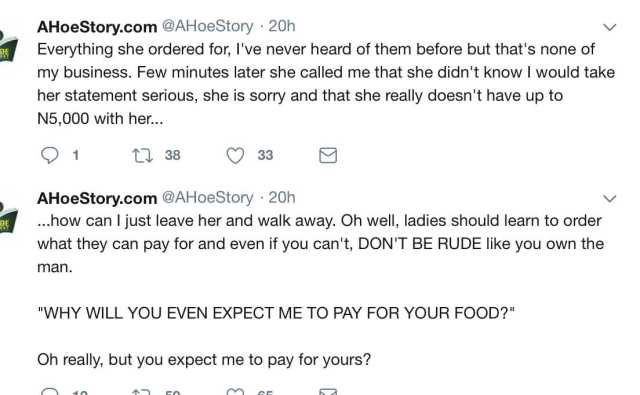 @SkateHoluwa I wonder why u didn’t ask for the amount they were selling the food she ordered and simply say u can’t pay for them than say she should pay all in the name of testing…u asked her on a date nigha..u shud pay.

@Mz_Suzzie_ Oh really? When someone is taking you on a date. Don’t u know how to comport yourself and eat moderately? Lol,so he should have asked for the price of food? Hahahahaha. Really???!

@GabrielSolanke. I think its appropriate to inform her beforehand if y’all going dutch… So you took a lady to a restaurant and said its not a eat out? Lunch dates, dinner dates etc. If you don’t want food lerrus go to a park abeg

@Dope_Template. So why are you defending imbecile behavior Am not even bothered about the amount but why order what you can’t afford Why being rude She got what she deserved He called her out on a date doesn’t mean he has to tolerate stupidity Besides no rule says the inviter must do the paying

@strangertheens For naija, guy… I no go spend pass 10k, if she eats more than I can pay even if I have the money, she’s on her own. Shey mo jor food provider abi.
@Mortdeciaa. why are you talking like a child,so because he called her out of her house to go on a date now means she should not be able to compose her self,they went on a date to get to know each other,the food is just something to keep them entertained