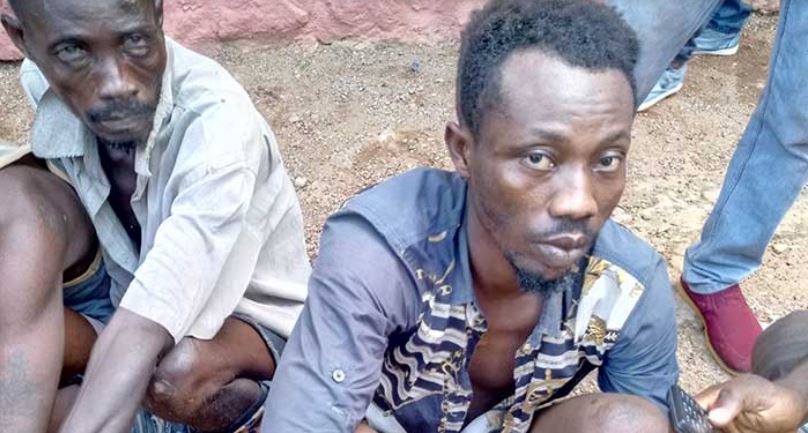 Kayode Oreneye arrested and paraded by the police (Photo:Samuel Awoyinfa)

A suspected cultist, Kayode Oreneye, was on Wednesday paraded by the Ogun State Police command, for allegedly killing one Shakiru, a member of a rival cult group, severed his two hands and sold the palms for a sum of N5,000 to a herbalist, Punch has reported.

The 27-year-old Oreneye, a member of Aiye cult group, was paraded alongside other 47 suspected criminals who were arrested for offences ranging from armed robbery, murder, and theft.

They were paraded at the command’s state headquarters, Eleweran, Abeokuta, by the State Commissioner of Police, Ahmed Iliyasu.

Oreneye told journalists that the late Shakiru belonged to a rival cult group, Eiye, and claimed that the deceased had attempted to kill him on three occasions but he escaped.

The suspect, who’s a father of two, also claimed that the deceased had also killed three members of the Aiye cult group.

Oreneye who confessed that he shot and killed Shakiru at Library Junction, Ilaro, on 12th February 2018 in a reprisal, said he later sold the deceased’s two palms to one Jimoh, a herbalist.

He said, “It is true that I shot and killed Shakiru because he had killed three members of our (Aiye) cult group.

“Again, he had made attempts on my life on three occasions but I was able to escape, and I had to strike before he would strike.”

Iliyasu told journalists that the suspect was arrested at a drinking joint in Oke Ilewo, Abeokuta.

Another alleged cult leader, Gbenga Ogunsanya, popularly known as Spartacus, was equally paraded with another member of his gang, Quam Olubodun.

Iliyasu said the 23-year-old suspect, and members of his gang had killed more nine persons, within a period of almost one year.

Ogunsanya who told journalists that he dropped out of secondary school, said he also belonged Aiye cult group and he moved around the city of Abeokuta with a squad of 30 members, all armed with different weapons.

His gang was said to have unleashed terror on fun-seekers at the popular Ori Omi fun spot, Ita Iyalode, Abeokuta, on December 31, 2017.

Iliyasu said the suspected cult leader who claimed to have been initiated into the group on 30th May 2017, was arrested on the 12th March 2018 by the men of the Special Anti-Robbery Squad.

Ogunsanya said his parents had consistently warned him about his wayward lifestyle but he never listened, but “now I regretted not listening to their advice and finding myself in this mess.”

Recovered from the cult group were one pump action gun, one cut-to-size locally made pistol, five live cartridges and assorted charms.