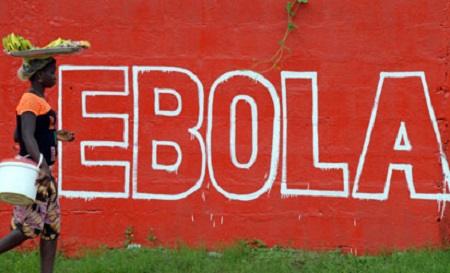 Two fresh cases of deadly Ebola have been confirmed and 10 more are suspected in Congo fuelling fears of another global outbreak of the disease.

Jean Jack Muyembe, head of the national institute for biological research in the Democratic Republic of Congo, confirmed the new outbreak of the lethal infectious disease on Tuesday.

Two cases have been confirmed and 10 more are suspected, according to Congo’s health ministry.

The new cases will alarm health officials after an unprecedented outbreak of the disease between 2014 and 2016 killed more than 11,000 people across western Africa.

Cases of the disease, a type of viral hemorrhagic fever, were confirmed in Britain, Italy, Spain and the United States, where one person died.

The epidemic of 2014 to 2016 was the most widespread outbreak of Ebola in history, plaguing countries such as Guinea, Liberia, and Sierra Leone with death and economic woe.

In June 2016, the outbreak was officially declared over, but the virus is still present in several African countires.

People who remain most at risk are those who care for infected people or handle their blood or fluid, such as hospital workers, laboratory workers and family members, according to NHS guidance.

To date, the latest outbreak is the ninth time Congo has been struck by the disease, which kills between 25-90% of those affected.

The most recent outbreak of Ebola in Congo was declared contained in July 2017, having killed four out of the eight it infected.

Ebola is believed to be spread over long distances by bats, which can host the virus without dying, as it infects other animals it shares trees with such as monkeys.

It often spreads to humans via infected bushmeat.

Congo’s vast, remote geography gives it an advantage, as outbreaks are often localised and relatively easy to isolate.

In West Africa, the Ebola outbreak that ended in 2016 killed more than 11,300 people and infected some 28,600 as it rolled through Guinea, Sierra Leone and Liberia before finally being contained.

Initial symptoms associated with Ebola include a fever, sore throat and muscular pain before more serious effects such as Diarrhoea, vomiting, a rash and stomach pain starts to develop.

Many victims bleed internally and externally before death if the symptoms aren’t treated immediately.

“The Ebola virus causes an acute, serious illness which is often fatal if untreated,” according to the World Health Organisation’s website.

“Ebola first appeared in 1976 in two simultaneous outbreaks, one in what is now, Nzara, South Sudan, and the other in Yambuku, Democratic Republic of Congo.

“The latter occurred in a village near the Ebola River, from which the disease takes its name.”

Scottish nurse Pauline Cafferkey was fighting for life when she contracted the disease while volunteering in Sierra Leone, where an epidemic killed almost 4,000 people, in December 2014.

Pauline, 42, from Glasgow, was in a critical condition at one stage but was declared to be free of infection and released from hospital in January 2015.

Despite returning to hospital on several occasions, Pauline bravely went back to the West African country last year to meet Ebola survivors and children orphaned by the disease.

“Coming here and meeting a survivor is important to me,” Pauline told the BBC.

“I wouldn’t even start to think about the mental health issues that everyone has gone through post-Ebola and during it as well.