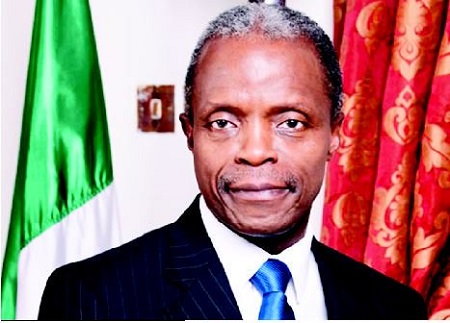 Vice President Yemi Osinbajo yesterday accused the Peoples Democratic Party (PDP) of plotting a return to power so as to resume treasury looting, The Nation has reported.

Osinbajo who described the All Progressives Congress (APC) led Federal Government as well-focused and determined to lift the country said the Buhari administration had performed better in three years than PDP did in 16 years.

The VP described those pushing for the ouster of the the Buhari administration as the corrupt who wanted to reclaim government at all costs in order to return the contry to corrupt ways.

He said the argument that nobody had been put to jail on the account of corruption could not hold water, saying: “We will continue to put them on trial even if the courts have not put them into jail”

He urged Nigerians to continue their support for the APC- led federal government in its quest to address the challenges confronting the nation.

He noted that the government had committed N1.3 trillion to infrastructural development since it came on board three years ago.

He said: “This government wants to be honest with the people. The difference between us and the previous governments is that we are not stealing public fund.

“We are able to achieve this because we are spending what we have for the people.We have spent over N1.3trillion on infrastructure to better the lives of Nigerians.

“The corruption is desperately fighting back so that they can come back to into power. God will not make it possible”.

On the MSME prgramme, Osinbajo said N80billion out of the budgetted N500 billion had been spent on the programme despite the paucity of fund coming into the coffers of the government.

According to him, additional 300,000 people would be employed into the N-Power, with 200,000 people already in the scheme.

At the palace of Oba Aladelusi, Osinbajo commended the monarch for his show of love at all times and promised that government was determined to fulfill promises made particularly the actualisation of a Teaching Hospital in Akure.

He told the monarch that the government was also working very hard to fix the blackout being experienced by the people of the southern senatorial district of the state.

The VP said the MSME’s clinic in Akure became necessary in ensuring that small businesses grow tremendously. He described it as a way to revitalize Nigeria’s economy.

Governor Oluwarotimi Akeredolu said the programme underscored the determination of the Federal Government to drive the country’s economy towards self-reliance, using this platform, as a delivery tool for development.

The governor noted that there could be no better demonstration of serious commitment on the part of the government than this direct involvement at the highest level of authority.