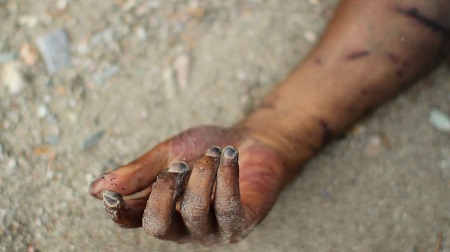 According to a report by The Nation, a middle aged man identified as Friday Igwe has been found dead in the pool of his blood with his head and private parts cut off in his country home of Amaonye in Ishiagu of Ivo local government area of the state.

The victim who was said to be a successful business man, according to report, had been having issues with his nephew, who is an Abuja based business man (name withheld) over a disputed piece of land some time ago in the community.

Speaking with The Nation, a member of Ishiagu community who did not want his name in print stated that the development had thrown the entire community into a state of confusion as the deceased was said to have started making effort to build his own house before he was suddenly killed by unknown assailants in the community.

“Friday Igwe was murdered in cold blood at his country home, Amaonye in Ishiagu in Ivo local government area on 27 April, 2018. The victim’s body was found with his head cut off, his private part cut off. The victim was a successful business man who surprisingly came

home frustrated. He is a nephew to an Abuja based rich industrialist, who also hailed from Amaonye Ishiagu”.

“The victim came home some years ago and was allegedly planning to build a house in a land bequeathed to him by his grandfather near St. Gabriel Catholic Church Amaonye Ishiagu. He shares the same grandfather with the Abuja based businessman. But about 2 years ago the victim about 35 years had a serious dispute with his nephew who also laid claim to the land also”.

“This disputed land landed the victim in the police as the Abuja based rich man made sure he was detained for more than a month and before the victim could be released. Mr. Ikechukwu Okorie had fenced the disputed land. The victim being frustrated decided to live at a distant settlement in the community. Up till now no arrest has been made. The corpse was taken to Agu 3 palace and finally to the mortuary.”

Confirming the incident, the Divisional Police Officer, DPO of Ishiagu, Mr. Urom stated that the matter would soon be transferred to the State Criminal Investigation Department, SCID, of the Police Headquarters in Abakaliki added that the deceased was killed by unknown assailant.

“His head was cut off; his stomach also burst open. He was killed by unknown assailant. The matter will soon be transferred to the SCID for further investigation.”

Reacting, the Community leader of Amaonye, Mr. Aja Chika who described the incident as very terrible prayed God that the perpetrators of the dastardly act be arrested and prosecuted according to the law.

“This is very terrible thing; since the existence of the town nothing like this has ever happened; the community is totally amazed by the development; am short of words; let the perpetrated be caught and brought to book; we have been having challenges since I came on board as   chairman  but this development is unfortunate.

The traditional ruler of Ishiagu community, the Agu III, HRH Eze Moses Okafor Ngele who is the chairman of traditional ruler’s council of Ivo LGA expressed optimism that the perpetrators will be arrested in no distant time through traditional means.

Share
Facebook
Twitter
WhatsApp
Previous articleSo Romantic! Davido And Chioma All Loved Up At Her 23rd Birthday Dinner (Photos)
Next articleShocking Story Of Police Inspector Who Died After Being Stoned By Okada Riders In Ebonyi
- Advertisement -