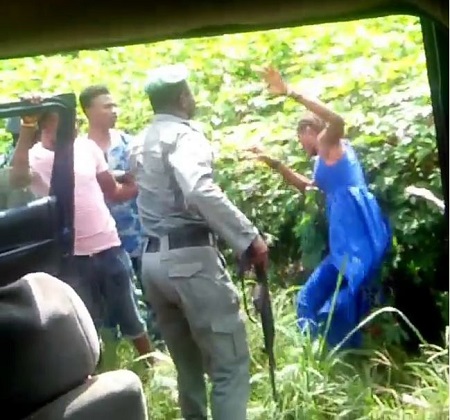 The police officer assaulting the woman in Delta state

The Nigerian Police Force through the Police Public Complaint Rapid Response unit has reacted to the brutal abuse a Nigerian woman suffered in the hands on a Police officer in Delta State.

According to the PPCRRU, investigations have already commenced to unravel what truly happened.

Recall that Nigerians expressed shock yesterday when the video showing a police officer attacking a young lady who refused to allow him search her bag filled with her panties surfaced online. The police officers had stopped a commercial bus the lady was in and insisted they must search every bag in the bus.

The young lady refused to allow them search one of her bags because it contained her panties. The officer was seen attacking the lady while raining abusive words on her.

Read below a statement by the Police Public Complaint Rapid Response unit.

The video of an altercation between a Police Mobile Force officer and a lady said to have occurred on 23.05.2018 along Mercy land road Warri, Delta State and circulating on social media has been brought to our attention.

The Public Complaint Rapid Response Unit (PCRRU) have commenced an investigation and would like to speak with the lady involved and witnesses.Please quote #PCRRU673916 when you call any of our phone lines in respect of this matter.

Members of the public are once again reminded that police officers doesn’t require search warrant to conduct a search on them or their luggage when accosted on public highways/roads. Citizens are also enjoined to be patience and obey simple police instructions during stop and search.