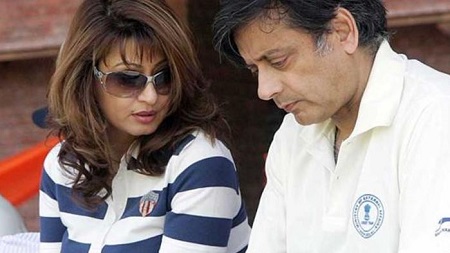 Sunanda Pushkar and Shashi Tharoor were married on August 22, 2010. Tharoor was on

Indian Police on Monday charged the country’s Congress leader, Shashi Tharoor, to court for abetting the suicide of his wife, Sunanda Pushkar.

Tharoor is the only person who has been arrayed as an accused in the case.

The police in its charge sheet, which runs into around 3,000 pages, has also alleged that Tharoor had subjected his wife to cruelty.

The police filed the charge sheet in the mysterious death of Pushkar before metropolitan magistrate Dharmendra Singh, who will consider it on May 24.

Pushkar was found dead in a south Delhi luxury hotel room on the night of January 17, 2014.

The Congress leader has been charged under sections 498 A (husband or his relative subjecting a woman to cruelty) and 306 (abetment of suicide) of the Indian Penal Code.

The charge sheet, which includes several annexures, said that Pushkar died within three years, three months and 15 days of her marriage to Tharoor, who is the Lok Sabha MP from Thiruvananthapuram.