In what will come across as a really shocking development, some daredevil armed robbers this morning blew up two bullion vans filled with money along Atlas Road towards the N12 just before North Rand Road intersection in South Africa.

According to Times Live, the robbers shot dead the drivers of the vans before they blew the vans open using Improvised Explosive Device IEDs and carted away millions of rands.

Five persons have been arrested in connection with the robbery attack. The five were caught at the George Goch hostel in Johannesburg after police chased them with a helicopter.

Police spokesperson Captain Mavela Masondo said that the police’s speedy response to the heist resulted in the quick arrest.

“We also recovered a rifle after the cash-in-transit heist which happened at about 9.30am. It is alleged that more than 10 suspects who were driving in four vehicles approached two G4S security vans.

“We managed to chase the suspects until at the George Goch hostel… we managed to arrest these five suspects and recover a car that we suspect was used during the robbery. We also recovered the rifle.

“As I’m talking to you‚ the operation is still underway because we believe that some of the suspects are still hiding at the hostel and we hope that we will manage to arrest all of them.” he said

See more photos from the scene of the attack below: 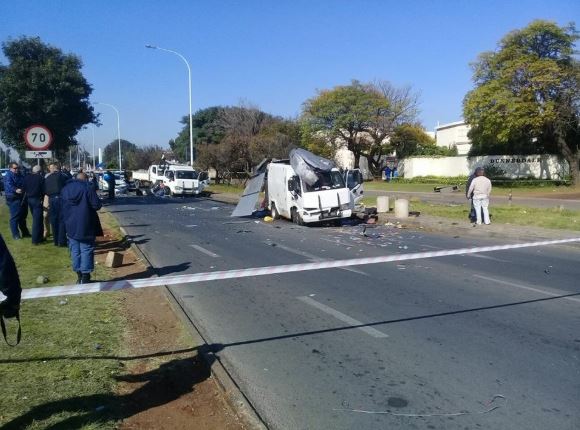 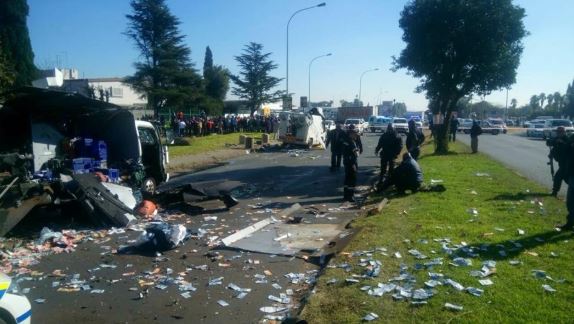