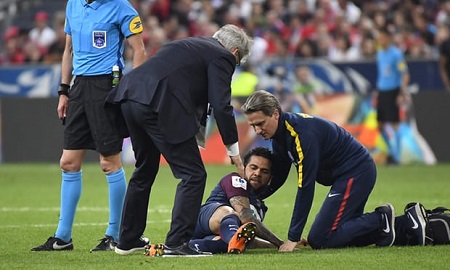 Brazil right back Dani Alves will miss the World Cup. The Brazilian Football Confederation has confirmed in a statement his knee injury makes it “impossible to call Dani Alves for the period of preparation, friendlies and, consequently, the World Cup.”

The 35-year-old was injured on Tuesday in the French Cup final while playing for winners Paris Saint-Germain.

The injury will sideline him for at least three weeks. Brazil’s first game in Russia will be on 17 June against Switzerland.

Alves played for Brazil in the last two World Cups and has 107 appearances for the team since his 2006 debut.

Meanwhile, Neymar has admitted he still has fears over missing the World Cup due to the broken right foot he suffered in March.

In an interview published on Friday, the Brazil and Paris Saint-Germain striker said treatment has worked “but there is always that fear of it (the injury) coming back.”

“I need to lose that fear as quickly as possible to arrive at the World Cup at my best,” Neymar said in an interview on Zico’s YouTube channel. “In the beginning we are hesitant about making the complete movement.”