Shocker: How Explosion Rocked A Catholic Church On Sunday Morning In Enugu 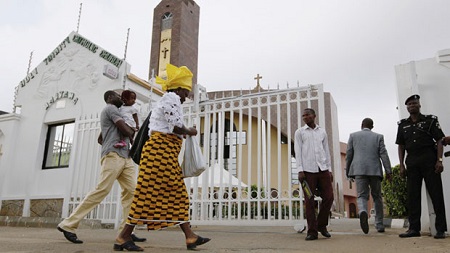 According to a report by Vanguard, what the police described as ‘minor explosion’ on the wee hours of Sunday morning rocked Holy Cross Catholic parish, Iji-Nike in Enugu-East Local Government Area.

Though not many knew about the explosion as it it occurred at about 5:40 am, just before 6am mass, the incident has caused worry for Enugu residents.

The parish priest in-charge of the church, Rev. Fr. Emmanuel Okwor said that the explosion occurred around 5:40 am when he was preparing for 6:00 am mass. He said that the sound shook the church that people in the neighbourhood were thrown into confusion while those in the church scampered for safety.

Rev Fr Okwor described the incident as worrisome and called for vigilance. He said said though the explosion was minor as the police described it, it would have caused stampede if it had exploded at the time the worshippers had filled church.

The Catholic Bishop of Enugu Diocese, Rev Fr Dr Calistus Onaga urged government and security agencies to do something fast before it gets out of hand.

Enugu state Police spokesman, Ebere Amaraizu confirmed the explosion, saying “it as a minor explosion of knockout magnitude that should not cause panic.

“We thank God that there was no loss of life nor major destruction. We have to be more vigilant and security conscious and be able to partner with security Agencies to ensure that there is no repeat of such an incident”.

Amaraizu said the police have already commenced investigation into the incident.