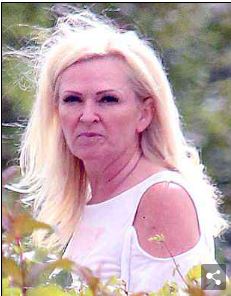 Audrey Stevenson, 46, launched a furious attack on a guest at her wedding

A bride who knocked a friend’s tooth out at her wedding after wrongly believing she had ‘made a move’ on her new husband has been fined more than £400.

Audrey Stevenson, 46, launched a furious attack on her guest Veronica Bannon, grabbing her by the hair and pushing her, smashing her head into a door.

Police arrested Stevenson and her new husband Scott Allan at their wedding reception and the pair spent their first evening as newlyweds in the cells, missing a flight to Mexico where they were set to spend their honeymoon.

Stevenson had assaulted Ms Bannon because she thought she’d made a ‘romantic move’ on Mr Allan, and left her victim needing cosmetic surgery.

Mr Allan, 55, walked free after the prosecution accepted his not guilty plea.

Stevenson originally denied assaulting Miss Bannon at the reception at the Star and Garter Hotel in Linlithgow on July 28 last year.

But when the case was called for trial at Livingston Sheriff Court last month she changed her plea to guilty at the last minute.

Stevenson told the court she would pay the charges with £100 monthly installments, which the Sheriff accepted.

The prosecution said: ‘The officers noted that she was missing a front tooth which she had at her hand at the time.

‘The complainer received some sort of cosmetic surgery’.

Stevenson and her husband were initially banned from staying overnight together at the home they shared in West Lothian.

Sheriff Martin Edington told the couple’s lawyers at the time that he was not willing to allow them to return to the same house in case ‘recriminations broke out’.

He remarked: ‘This was arguably the ruination of one of the biggest days of their lives and you’re telling me no-one’s going to harbour any ill feeling.

‘I’m not saying they shouldn’t be able to contact each other but not at the same address.’

Allan’s lawyer Sonia Cheema said her client had expressed ‘extreme shame’ for having found himself in the situation he was in.

The special bail conditions barring Stevenson and Allan from sleeping in the same house were lifted a few days later after the court was told there had been no reports of any domestic abuse.

During today’s court appearance Stevenson’s defence said the incident was of ‘unusual circumstances’.

Darryl Lovie, defending the bride, said: ‘She has no previous convictions. It’s really an offence committed at the heat of the moment.

‘She has felt embarrassed in her day to day personal life and work life. This might be a reaction which is unacceptable but not excusable.

‘She is a responsible law-abiding citizen. She has a professional reputation. It has now been tarnished.’

The Sheriff told the court: ‘This is unacceptable behaviour. But you have no previous convictions. And you have expressed your regret.’

Stevenson was ordered to pay a financial penalty of £450 alongside a compensation payment of £400.