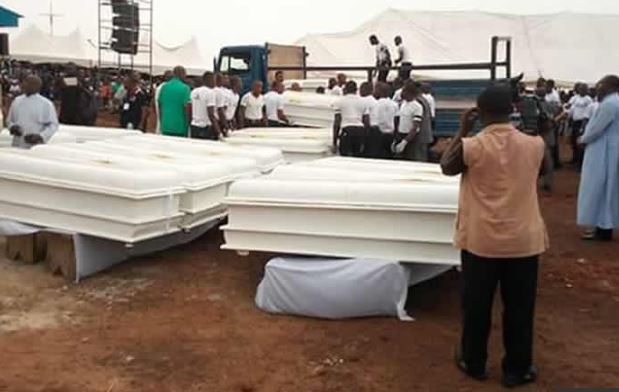 The incident was said to have occurred on Tuesday while the deceased were returning from the burial of the Catholic priests and 17 parishioners killed by herdsmen earlier in the week.

The deceased, who were said to be riding on a motorcycle, were said to have been ambushed by the herdsmen who reportedly slaughtered them.

Naka/Makurdi road, which is a federal road, has been abandoned for a long time due to the activities of herdsmen along the federal highway.

A native who spoke to our correspondent said, “The two men were returning from the burial of the Catholic priests and the parishioners when they were attacked by herdsmen.

“Naka/Makurdi highway has been abandoned since herdsmen invaded Naka a few weeks ago. Anyone coming to Makurdi from Naka has to pass through the major road to Taraku, making the journey of 30 minutes’ drive to result in two and a half hours’ journey.

“I think the deceased just decided to take the route; unfortunately, they were killed,” the local said.

Efforts to get the state Police public relations officer, ASP, Moses Yamu, were not successful, as he did not respond to his call.

The state governor, Samuel Ortom, however confirmed this while receiving in audience on Thursday, the Nobel laureate, Prof. Wole Soyinka.

“Killing is still ongoing. Just on Tuesday, two people returning from the burial were killed along Naka/Makurdi road,” Ortom told his visitor.