The Headies (previously known as Hip Hop World Awards), since 2006 has been recognizing and celebrating outstanding achievement in Nigeria’s music industry.

The 12th edition of the award show was held yesterday with singer, Wizkid, vocal powerhouse, Simi and DMW boss Davido were the biggest winners of the night.

One of the winners of the show was songstress, Aramide, who won the Best Alternative Song: Fun mi lo wo mi featuring Sound Sultan & Koker. 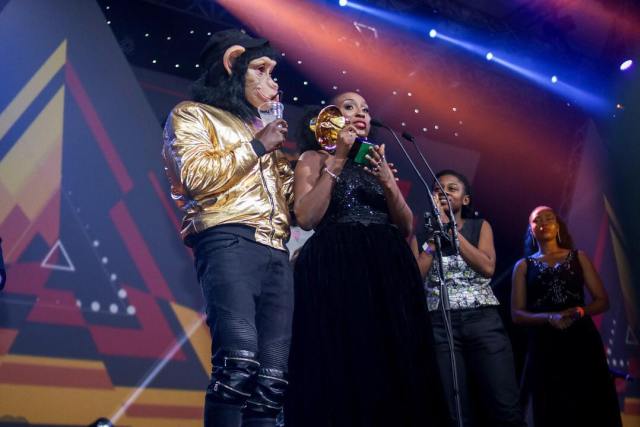 While giving her speech as she received her award, she overwhelmed with joy that she couldn’t believe that she won the accolade.

Instagram comedian, Ebiye in light of her surprise stated that she probably could have f**cked for her to win the award.

He wrote on his page, “She can’t even believe it, lol she prolly fucked for the award, #Headies

His statement, didn’t go down well with a certain social media critic, who of course wasted no time in giving it back to the comedian as well.

In 2012, Aramide was a member of ELDee’s Trybe 2.0 experiment. I was working with Bubbles Magazine at the time and we profiled all the artistes on the label. The night before the shoot we sat ELDee’s living room and he played several unreleased songs from his artistes. Although Aramide was relatively less important to the label compared to SoJay, K9 and Eva; it was clear that her gift surpassed all of the others by far.

The next day, she arrived before the others for the photoshoot. We spoke about her journey and how her NYSC primary assignment was at a radio station practically next door to my house in Ibadan at the time. And boy, the girl could sing!

Since then she has changed labels. She moved to Baseline Records where again, it seemed like the execs had a marquee player they would rather spend all the money and attention on. Since 2014 however, she has proved that she’s no push over. Her voice is unmistakable and her dexterity on the guitar is unignorable.

Her career goes as far back as 2006 when she was on a popular talent hunt. She has an album to her credit as well as a number of worthy tunes.

She won her first Headies in 2015 when a certain Instagram buffoon by the name of Ebiye was just finding out how Instagram works. Some people find his one minute skits funny: but I know that once you put these IG comedians on stage, it becomes rocket science. Their art is buffoonery, not comedy.

Last night, Aramide won the Headies award for Best Alternative Song. Somehow Ebiye imagined that his opinions counted, and he dismissed Aramide saying she must have slept with someone to have won.

Like they say, he doesn’t have the range. At best, he’s a slapstick comedian. But his slight shows clearly what women have to deal with. Each success is chalked off to some sort of sexual gratification.

When women cry out about the sexualization the suffer by just being themselves, this is what they mean. Despite the fact that Aramide is happily married, this caricature of a being could not help himself by reducing her worth. Now imagine how more powerful and successful men see women. One wonders who Ebiye slept with for his one hundred and sixty thousand followers.

We must do better. Ebiye is just one person, but he’s a reflection of a very sick industry- and society. Emerging female entertainers deal with sexualization and objectification on a daily basis so it is incredulous to them when a woman actually succeeds.

Nincompoops like him cannot believe that she did it by herself and resort to the tired line- ‘she fucked someone to get here’. Ebiye has ‘apologized’ for his ‘distasteful joke’.

But would he have had the cojones to make such a joke if he was standing on stage and being televised live? Would he have made that type of joke if Aramide were standing right next to him? Obviously not. That’s why he became a slimy troll who hid behind a smartphone to insult her on Snapchat.