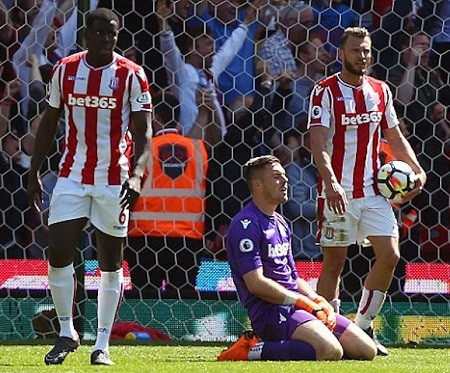 Both Coach and players were shattered as Palace ended their dream of escaping from relegation.

Coach  Lambert who took charge of the team in January said it was hard summing up his feelings as the Potters went down at home.

The team knew what was at stake ahead of the match:  that anything else  other than victory would spell the end of the Club’s decade long spell in the Premier League.

Xherdan Shaqiri’s sensational first-half free-kick had the home faithful dreaming of a great escape, only for second half efforts from James McArthur and Patrick van Aanholt  seal the Potters’ fate ahead of next weekend’s curtain closer at Swansea City.

A devastated Lambert said at the end of the match:  “As you can imagine my emotions are up and down right now, and it is hard to give a true reflection on how I am feeling so soon after the final whistle, but it hurts.

“It is a tough, tough afternoon for me, for the players and for every single person connected to this Club.

“When teams don’t get results and you sleep walk into places you never thought you would be then it is tough to come back from that.

With only one game at hand at struggling Swansea, to close their season, they have become the first team to  drop from the lucrative league to the Championship from next season.

RYAN Shawcross, the team skipper said he and and teammates will take stock of their relegation  before plotting an immediate return from the Championship.

Speaking immediately after the loss,  he admitted that performances throughout the campaign hadn’t been good enough, but said he was ready to fight tooth and nail to help the Club bounce straight back up.

“It’s a tough day, a really tough and sad day, and we are going to have to take stock of things, look at what has gone wrong and make sure we are better for next season,” he said.

“We have given it a right go since the gaffer has come in, we have been in every game we have played in but for whatever reason we haven’t scored the goals we have needed to.”

Stoke at 19th position, have only recorded 30 points in 37 games and have negative goal difference of 34.

The other two teams that will suffer relegation may be West Brom Albion, now rooted at the bottom, Southampton, Swansea City, West Ham, Huddersfield Town .

Share
Facebook
Twitter
WhatsApp
Previous articleBBNaija: Tobi Seen On Camera Trying To Kiss Anto
Next articleBuhari Reveals Why He Decided To Contest In The 2019 Election
- Advertisement -