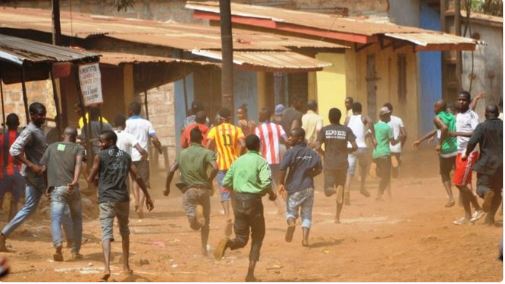 This is coming two months after a Delta State High Court sentenced Chief Newton Agbofodo to death by hanging over alleged murder and other cases.

It was learnt that in the heat of the ongoing Ekpan community crisis, gunmen alleged to be loyal to two different factions (names withheld) allegedly shot him dead near the residence of Chief Agbofodo.

With the ugly incident, the crisis in Ekpan community has been aggravated as gunmen have continued to shoot sporadically in the town.

At the the time of filing this report, residents are scampering for safety for fear of not being hit by stray bullets.

A community leader who craved anonymity confirmed the report in a chat with a correspondent. The community leader noted that the matter has.been reported at the Ekpan Police Station just as he condemned the act.

The community leader also called on relevant security agents to fish out the perpetrators of the dastard act and bring them to justice.