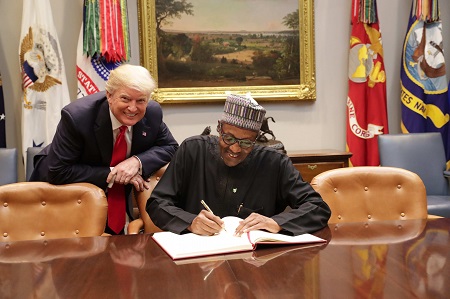 President Muhammadu Buhari’s recent meeting with President Donald Trump of the United States (U.S.) gave the two leaders the opportunity to discuss significant issues bordering on fight against terrorism and how to grow Nigeria’s economy through partnership.

The meeting at the White House was important even as Buhari became the first sub-Saharan African leader to be hosted by Trump for such a fundamental bilateral talks on more issues such as trade, investment and governance.

The meeting attracted the attention of Nigerians and global players in terms of expectations and opportunities, which discerning observers describe as significant as strategic.

After the bilateral meetings and subsequent meetings with investors, some analysts however observe that the visit has brought some gains and opportunities for Nigeria.

For instance, Minister of Foreign Affairs Geoffrey Onyeama said that the meeting discussed how to increase the level of trade between Nigeria and the U.S.

“On security, the U.S. has been helping Nigeria, supplying military equipment in the fight against terrorism and there is agreement to continue the cooperation between the two countries.

“In the area of governance, the meeting discussed the return to Nigeria of the money that has been siphoned out of Nigeria and lodged in various banks around the world.

“There is cooperation with U.S. helping to repatriate these funds to Nigeria, so they are good wins on the security side, continued cooperation and, of course, repatriations of these funds and increase in trade,’’ Onyeama said.

Similarly, Minister for Justice Abubakar Malami said that the U.S. government was committed to repatriating more than 500 million dollars to Nigeria.

“There have been clear directives for both attorneys-general to meet and have a road map for the repatriation of the assets and we have succeeded in having a very positive progress.

“The truth is that we are looking at the shortest practicable time for the repatriation but the fact is that there is political commitment by the two presidents.

“This is a clear demonstration of the fact that the possibility of having the money repatriated within the shortest possible time cannot be ruled out,’’ Malami said.

Sharing similar sentiments, Minister of Industry, Trade and Investment Okechukwu Enelamah said that Trump acknowledged the importance of the Nigerian economy in Africa and the role Nigeria could play in its relations with U.S.

“There is an acknowledgment that the U.S. is clearly the number one economy in the world and there is a lot of room for cooperation which both presidents view as a priority.

“There are a lot of cooperation such as the commercial and investment dialogue which we have signed with the U.S. Secretary of Commerce Wilbur Ross.

“It is really focused on how to deepen the commercial relationship in support of businesses from the two countries as well as the growing trade in a win-win partnership,’’ Enelamah said.

Enelamah said that the U.S. businesses operating in Nigeria were looking for a way to increase their investments to improve production and create employment.

“There is the big one — the 2 billion-dollar investment — to revamp our existing rail and making sure it is used for cargo and transport.

“That is the narrow gauge and the exiting rails we have in addition to all the new ones we have and that is just one investment from one company.

“Some of the companies which authorities Buhari had met with included John Deere for assembling and supplying tractors in Nigeria.

He said that the company would train, employ people and help the agriculture value chain in terms of mechanisation and automation, among others.

The minister said that other multi-million dollar companies such as Cotava and Continental Grains, among others, were committed to making serious investments in Nigeria that would run into billions of dollars.

“Boeing is very interested in supporting the aviation sector; it plans to roll out something that will increase the availability of flights from Nigeria while Procter & Gamble is looking to expand its investment in Nigeria.

“So, in terms of investment and commitment, there is every reason to be positive, it is certainly in billions of dollars, we need to sharpen our pencils and take it on.

“I was encouraged by the level of engagement, commitment and frankly, the way people perceive and assess the opportunities; I think it’s good we had the blessings and the endorsement of the two presidents.

“We have had meetings that backed that up; going forward, we are looking to see good things come out of this visit,’’ Enelamah said.

Amosun said that the Trump administration showed commitment and the general impression that it would support what the Nigerian government was doing.

“We are gaining a lot; in the area of security, they’ve actually said they’re not only selling those Tucano helicopters to us, they’re going to follow it up with training and other assistance.

“In fact, as we speak, they are already in Nigeria assisting and they promised to do more,’’ he said.

Amosun said that he was impressed by Trump’s commitment that the U.S. would now focus on the agriculture sector in its assistance to Nigeria.

In the same vein, Gov. Simon Lalong of Plateau said Buhari’s meeting with Trump “is not only fantastic but successful for the progress of Nigeria.

“If you look at the totality of why we are here, I think we have even achieved more than what we bargained for.

“So, in all the areas, they promised to help us, particularly in fighting terrorism in Nigeria and the security challenges that we have.’’

Irrespective of the success and expectations from the meeting, concerned Nigerians caution the Federal Government against being carried away by the euphoria of the visit.

They advise that the authorities should rather make concerted efforts to leverage on the goodwill of the U.S. government and ensure that Nigerians reap the benefits of the visit.