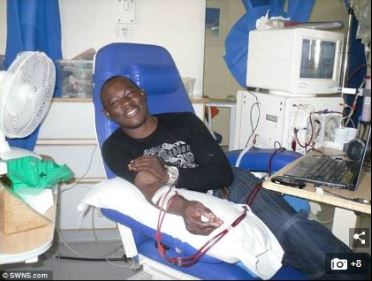 A father had five kidney transplants in his life — and still has all of the organs inside him.

Darren Ferguson, 37, had his first transplant aged just five years old – and has no idea how many are currently in his body, as none have been removed.

He was born with a blocked kidney which medics noticed three weeks after he was born, and was diagnosed with chronic key stage five renal failure.

He was treated at Great Ormond Street Hospital in London where he met Princess Diana as a teenager, and has had a kidney transplant about once every five to ten years.

Despite the massive health obstacles he faced, Darren has gone on to lead a ‘fulfilling’ life, and defied doctors who said it was unlikely he would ever have children.

He has revealed he’s nicknamed ‘Robocop’ by his family due to the equipment he needed to keep him alive.

Darren said: ‘The life I live now is a lot different from what it used to be. I now have the freedom to do what I want to do. I’m a lot fitter, healthier, and travelling the world.’

At 24 he was given another new kidney, and received his fifth transplant in 2011, from a pal, Lee Ferrigan, whose wife Keisha had died of stomach cancer aged just 32.

‘He said to me, ‘I couldn’t help her, but I can help you,’ Darren said. We went through all the tests and it came back a perfect match. Fingers crossed it will be the last one.’

The life-saving gift came as Darren had nearly begun to give up hope, having had nine friends and his family members test negative for a match.

In between transplants, Darren was kept alive by being hooked up to a dialysis machine which removed toxins from his blood.

He said: ‘I’m not sure how many kidneys I have got inside me. They normally dissolve over time.

‘I know when I had my last transplant they were talking about where they were going to put it.

‘As it stands I can’t tell how many kidneys I’ve inside me, whether it’s five or three or one.

‘To take out a kidney which is causing problems is longer surgery and takes longer to recover from. They never felt it necessary to take one out.’

His problems were detected shortly after he was born, and he was spent his entire life being treated for the potentially fatal condition.

Darren said: ‘When I got home, my parents knew there was a problem. All I would do is sleep all day. I didn’t wake up for feeding.

‘When they would feed me it would drop out of my mouth.’

He was initially taken to the family’s GP in Kettering, Northants, and from there was rushed to Great Ormond Street Hospital where he was diagnosed with chronic kidney failure.

‘My first transplant was aged five years old,’ Darren said. ‘It has been crazy.’

At times the demands of his medical condition meant he was visiting a hospital three times a week, and was on dialysis three times a day.

A catheter was inserted into his lower stomach and a CAPD dialysis functioned like a mechanical kidney.

But medical developments have made hugely positive changes for Darren, allowing him to receive treatment at home in Milton Keynes, Bucks, when necessary.

He works as a social media manager, which also allows him flexibility around hospital appointments and working remotely.

Darren said: ‘With the medical condition I couldn’t really hold down a job as I was spending so much time in hospital.

‘I lost one of my kidneys because I went back to work too soon.

‘One day I felt really tired and lethargic and the doctors said ‘I’m sorry, your kidney is not working.’

Miraculously he was able to become a father without using IVF, which he and Amanda feared they may have to resort to.

‘The doctors said it was unlikely I would be able to have children,’ Darren said.

‘Nothing was happening, then we went to the doctors.

‘They said “with your medical condition it is unlikely you will be able to have children naturally”.’

The couple were desperate for a child and began to investigate infertility treatment – but then Amanda became pregnant unexpectedly and gave birth in June, 2014.

‘We had two beautiful children naturally, they are a blessing,’ Darren said.

He had been honest with his 21-year-old bride about the prognosis, which was uncertain at the time they tied the knot.

Darren said: ‘My wife is really supportive. We got married when she was 21, and she was on the cusp of her career as a makeup artist.

‘Before we got married, I said ‘this is my condition, I don’t know how long I will last.’

‘But the crazy woman still married me.’

All the organs Darren received apart from the most recent one from Lee had come from the organ donor register.

But Darren does not believe that the opt-out system for the regist, which has been implemented in Scotland and Wales, should be introduced in England.

He said: ‘I do feel it should be down to choice.

‘Nobody should feel pressured or obligated to do it.

‘It is a decision that should not be made lightly.’

He added: ‘For people who say they don’t want to go under the knife and take time off work, it is not that bad.

‘My friend Lee, who gave me my last kidney, was in and out of hospital in three days.

‘Now they can do keyhole surgery.’

He has now written a memoir, How I Survived Five Kidney Transplants And Won.