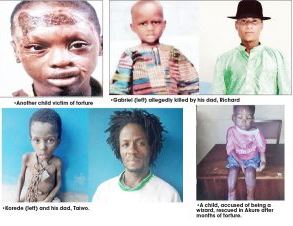 After the death of his parents, eight-year-old Friday Paul got temporary accommodation in his uncle’s home, pending when a permanent home would be found for him.

But from the moment the orphan stepped into that apartment at 6, Anjolarin Street, Odogunyan, a community in Ikorodu, Lagos, life took a pathetic twist, as the boy daily suffered unimaginable brutality.

The situation took a deadly turn when his uncle drove a three-inch nail into his head for allegedly stealing N500. Though he survived the ordeal, the boy would live with the scar all his life.

On August 2, 2016, a stepmother, whose whereabouts remain unknown took bestiality a notch higher when she cracked the head of her four-year-old stepson with the pointed edge of a shoe. She also broke the arms and legs of the boy’s two-year-old sibling in Igabi Local Government area of Kaduna State.

Hospital reports later indicated that the children were also treated for bruises on the eyes, stomach, back and private parts.

These horrors are realities that play out for countless children in homes across Nigeria. Children are starved, beaten to death, chained for months, scarred with hot iron, bathed with pepper and cut with razor blades by men and women that are supposed to be catering to the needs of such minors.

Unfortunately, many of these children are abused by their own parents or relatives. With reports indicating an increase in abuse and severe torture of children, many have opined that a culture of bestiality appears to be gaining ground in Nigeria,

And as poverty continues to wreak havoc in many homes, and harsh economic realities make survival difficult, most parents have resorted to placing their children in the care of extended family members so that such children might have a better life.

These children are, however, turned to slaves. They are confined to the house and condemned to work long hours. They are mostly underfed and deprived of sleep and other basic necessities. In several instances, they are severely punished for not accomplishing tasks that are beyond their ability. And for the females, their gory experience could include sexual abuse.

Maltreatment or brutality of any form, according to a child counsellor, Njideka Okeke, is child abuse. She noted that such acts fall foul of the Child Rights Acts, which aims at guaranteeing the rights of every child to have a secure future.

“It breaks the heart that, daily, children become more vulnerable to neglect, violence, child murder and various forms of cruelty. I believe a framework to better protect Nigerian children should be drawn up. A nation that cannot protect her children is endangered and may be unknowingly destroying the most valuable human resource base that would define and sustain her future,” she said.

According to an International Labour Organisation (ILO) report, about 10 million African children under 15 are abused. The United Nations Educational Scientific and Cultural Organisation (UNESCO) noted that at least 16 million children not more than 13 years of age work for long hours, yet are underfed and underpaid in the process.

According to statistics from a 2014 research, the National Survey on Violence Against Children, published by the National Population Commission, and the United States Centres for Disease Control and Prevention, Nigeria has one of the worst statistics on violence against children in the world, with up to six in 10 children suffering from physical, sexual and emotional abuse before the age of 18.

In 2017 alone, at least 31 cases of violence against children were reported in the media. Lagos led with nine cases. Yet, each day, more bizarre acts of bestiality towards vulnerable children continue to unfold.

On August 17, 2010, 14-year-old Oliver Arakwe was allegedly tortured to death by his employers, Elochukwu and Chiamaka Nnajiofor, for alleged misbehaviour. It was later discovered that the deceased was beaten up and kept in the toilet for two days.

In August 2013, policemen arrested one Mama Christiana at Barrack Line, Suru Alaba, Olodi Apapa, Lagos, for inflicting wounds on her house-help, Angel, leading to her death. The woman allegedly beat the 16-year-old till she slumped and started gasping for breath.

In June, 2015, Mrs. Agnes Uchendu and her son, Ikechukwu, were arrested for inflicting injuries with hot iron on their house-helps, Hope and Ngozi, aged 11 and nine, for allegedly stealing N100. Their arrest followed a petition by the International Federation of Women Lawyers, Abia State chapter.

In May 2016, a toddler was brutalised by his stepmother and paternal grandmother. The two-year-old had his body lacerated, his bones were broken and a part of his penis cut off.

Korede’s case caused quite a stir on July 23, 2016. The gaunt, nine-year-old boy was chained for weeks by his father, Francis Taiwo, a pastor with the Celestial Church of Christ, in Ogun State. He was accused of stealing and being demon-possessed, and was chained to have the spirit of stealing exorcised.

For daring to collect money from a neighbour to buy school socks, Chinedu Okorie, 12, was bathed with hot water by a 39-year-old trader, Chinwe Abasi, in 2017. The boy, who doubled as a house-help and sales boy for the woman, had earlier requested socks from her but had his request turned down.

Richard Inimgba, 39, is serving a prison term for killing his seven-year-old son, Gabriel, in Amadi-Ama, Port Harcourt, Rivers State. Alongside his wife, Blessing, Richard used a cutlass to inflict cuts on the deceased after beating him up with a plank for allegedly stealing N3,200. A carpenter, who was secretly enlisted to make a coffin for the burial of the child, exposed the couple.

On July 31, 2017, 13-year-old Tobi was burnt with iron and tied to a window by his father, Austin Segun. The boy was rescued by a vigilance group in Eruemukohwarien community, Ughelli, Delta State. Tobi was accused of being a wizard.

Also in July last year, a 10-year-old girl that was battered and burnt by her uncle’s wife, Remi Joseph, in Gonigora, Kaduna State, was rescued by security operatives. The girl, who was out of school, was found malnourished.

On August 11, 2017, a 45-year-old mechanic, Sikiru Adebayo, was arraigned before a magistrate’s court in Osogbo, Osun

State, for flogging his four-year-old son, Uthman, to death over the theft of a neighbour’s belt.

Still in August, Nasiru Adeyemo, and his wife, Idayat, were arrested for cutting off the index finger of his seven-year-old daughter from a previous marriage. They were nabbed after the girl was found tied in a sack and dumped to die in Asabala, along Papalanto-Sagamu Road in Abeokuta, Ogun State.

Also, on September 25, 2017, Gift Igwe was arrested in Lagos for setting Chimobi, her husband’s 10-year-old brother, ablaze for misplacing a pair of trousers bought for him. The boy was later taken into protective custody by the Lagos State government.

The Lagos State Commissioner of Police, Imohimi Edgal, on November 22, 2017, rescued a 13-year-old girl, Nkechi Oseh, who her boss, Ms Betty Ifeoma, locked indoors and travelled out of the country. The girl was left with only two packets of cabin biscuit.

With these alarming list of abuse of children, concerned Nigerians have maintained that the only way the worrying trend could be reduced is when the  Child Rights Law, adopted in 2003, is embraced across the 36 states of the federation.

After a series of advocacy events and protests, the National Assembly passed the Child’s Right Bill into law in 2003 and it was assented to by then President, Olusegun Obasanjo.

The act is a follow-up to the Convention on the Rights of the Child, which the United Nations General Assembly adopted on November 20, 1989.  The African Union Charter on the Rights and Welfare of the Child and the AU Assembly of Heads of States and Governments also adopted it in July 1990. Nigeria has signed both instruments, and had them ratified in 1991 and 2000, respectively.

The two international instruments contain a universal set of standards and principles for the survival, development, protection and participation of children in socio-economic activities.

The Child Rights Act partly states: “Every child is entitled to respect for the dignity of his person, and, accordingly, no child shall be subjected to physical, mental or emotional injury, abuse, neglect or maltreatment, including sexual abuse; or subjected to torture, inhuman or degrading treatment or punishment; or subjected to attacks upon his honour or reputation; or held in slavery or servitude, while in the care of a parent, legal guardian or school authority or any other person or authority having the care of the child.”

A guidance counsellor, Mrs. Itunu Olayiwola, said acts of brutality on children could cause life-long damage to the psyche and dignity of victims. She said victims also tend to become promiscuous, suffer from post-traumatic stress disorder or become withdrawn with poor grades in school.

A human rights activist, Obinwa Odogwu, noted that, constitutionally, government at all levels are entrusted with the responsibility of protecting children.

He said that Nigerian leaders seem to lack the political will to implement or domesticate the various statutes that protect children and women’s rights.

Samson Iyayi, president of Life Parenting Academy, said the effect of maltreatment on children goes beyond the physical, noting that it could instigate sadistic behaviours and criminal tendencies later in life.

For him, a line should be drawn between discipline and maltreatment. He also advocated proper legislation and enforcement that would curb the ugly trend.