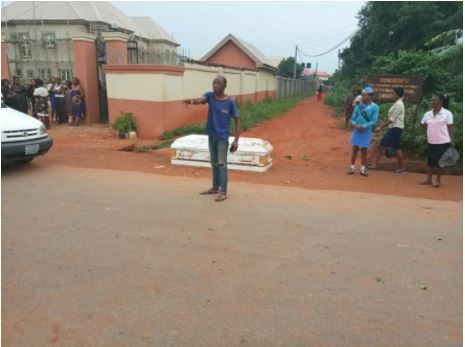 The man’s dead body was dug up

Angry youths had to dig up the corpse of a man after a Reverend sister; Maria Amadeus Egbuonu buried her (Chief David Egbuonu) against the wishes of the community – in a grave in Uruagu village, Dunukofia local government area of Anambra state.

Below is a report on the matter as shared by Morningstar Political Moment Matters Reporters (sic).

Chief David Anumba Egbuonu was born in the year 1912, to family of Mr Egbuonu of Umuobii Kindred,Uruagu village of Adagbe quarters in Umudioka acient kingdom of Dunukofia Local Government Area of Anambra State. Chief Anumba Egbuonu was a business man to the core and industrialist, with his insight into business, it made him to travel to different African countries for business investments and towards his retirement age, he settled down at the great commercial city of Onitsha, in Anambra State.

From our findings and interviews from family members, Kindred members and villagers, we deduced that, the second wife and the mother to Rev Sis Maria Amadeus Egbuonu and also being the mother of the fourth son (Mr Ugochukwu Egbuonu) of the family are laying claims on the properties of Chief David Egbuonu as the only legal family, he has. From our interviews and investigation, it was gathered, that the family of the second wife forged a Will on 2013, which allocated all the properties of Chief David Anumba Egbuonu to them, which are located both in Umudioka, Onitsha and Chad, even the second surviving wife, Mrs Joy Egbuonu was not mentioned in the will. 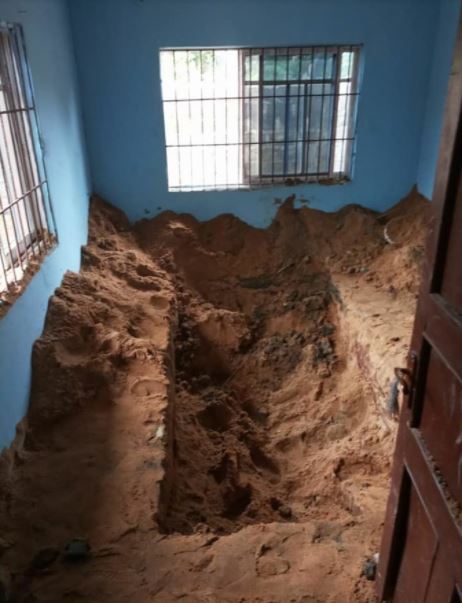 The room where the man was buried

We also learnt that the Rev Sis Maria Amadeus Egbuonu, her brother Ugochukwu and two of her sisters Felicia and Catherine Egbuonu (from the second wife) got a share from the ancestral land of Chief David Anumba Egbuonu, without any of their siblings from other wives gotten any share. From our investigation, it shows that Mr Ugochukwu Egbuonu(the fourth son,from the second wife) is laying claim on the OBI(Ancestral home) of Chief David Egbuonu . We interviewed an elder from Uruagu village, to know whom the OBI(Ancestral home) belongs to, he said, that traditionally and ethically, the OBI(Ancestral home), belongs to the first son of Chief David Anumba Egbuonu not the fourth son, no matter any circumstances,or it will be a sacrilege.

We tried to find out, why the Rev Sister Maria Egbuonu and her immediate family were laying claims on the said properties, we found out that immediately after the death of the first wife, who happens to be the mother of the the eldest son in the family, Chief David N Egbuonu Jnr,the Rev Sister Maria Egbuonu and her mother took over the feeding of their aged father, and with the opportunity, all the manipulations started and Rev Sister Maria Amadeus Egbuonu blocked other children of Chief David Anumba Egbuonu access to their father, when he was under her care.

The family members of Chief David Anumba Egbuonu, said that, they were informed of their father’s death around November 2017 while their father died in August that year. When they looked into the discrepancy in the time of informing them of their father’s death, they found out that, it was done intentionally, so that it will give Rev Sis Maria Amadeus Egbuonu, time to sell most of their father’s properties and allocate Chief Egbuonu’s ancestral lands to her sisters and brother.

It was gathered that, Rev Fr Oguejiofor being the peace loving priest, called a general meeting of all Chief David Anumba Egbuonu family and diverged into the case to settle the family crisis, but Rev Sis Maria Amadeus Egbuonu rejected all the peace accord by Rev Fr Oguejiofor. Rev Sis Maria Amadeus Egbuonu was of the view, that her immediate family is the only legal family of Chief David Anumba Egbuonu.

Then Umuobi kindred of Uruagu village tried to sue for peace, by condeming the claims being done by Mr Ugochukwu Egbuonu (fourth son) of the second wife as the legal owner of OBI(Ancestral home), and the Kindred mandated Rev Sis Maria Amadeus Egbuonu to surrender all the properties of Chief David Egbuonu to the family members for proper and equal share, but the kindred peace accord fell on the deaf ear side of Rev Sis Maria Amadeus Egbuonu.

After all the peace accord meetings, that failed, the other children of the other four wives decided to seek a redress from the court of law. They sued Rev Sis Maria Amadeus Egbuonu and brother to the court and got an injunction that no one should enter or trespass on any of the Chief David Anumba Egbuonu’s properties or even bury him, pending the final judgment.

It was also gathered that Chief David N Egbuonu Jnr, the first and eldest son has been threatened to be killed so many times, through calls and text messages, regarding his stand that peace must reign before the burial of their father. 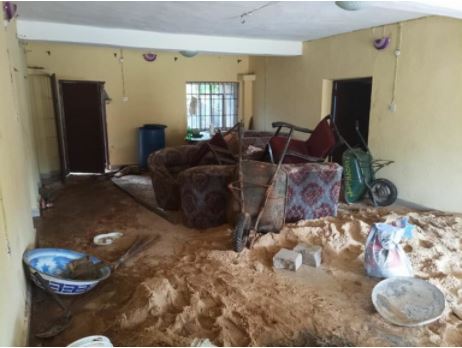 The family got a wind of information that, Rev Sis Maria Amadeus Egbuonu ,the brother and sisters are planning to bring back the corpse of their father home for burial on 8th May, 2018 without the consent of other four families.The family paid for announcement on the evening of 7th May, 2018 round the villages of umudioka and to the parish priest of St Anthony Catholic church, umudioka , that they have not settled their matter in the law court,and that after the settlement, they will announce to the town the actual date for the burial as agreed by the general family through the eldest son.

To the family’s utmost suprise, Rev Sis Maria Amadeus Egbuonu, Felicia and Catherine Egbuonu in the company of two other Rev sisters from Immaculate Heart of Mary, Awo Omamma, Owerri Archdioceses, with fully armed MASSOB thugs, drove in on 8th of May, 2018 at the hours of 3am mid night and buried Chief David Anumba Egbuonu in a shallow grave inside a room.

The villagers were watching the abominable act, but they couldn’t stop them because of fear of being attacked by the armed MASSOB thugs, that came with Rev Sis Maria Amadeus Egbuonu. Immediately they left ,after burying the corpse in the shallow grave inside a room, the villagers and some people around, started shouting and the angry youths dug out the casket before the arrival of the Chief David N. Egbuonu Jnr, from onitsha,who happens to be the first and the eldest son and Rev Canon Iyke Egbuonu. After calming the angry youths, they returned the corpse, back to the mortuary.

An interview was conducted with a chieftain in the community, to ascertain whether the action of Rev Sister Maria Amadeus Egbuonu was good, the Chief decried her act and labelled it as abomination and sacrilegious and demanded for immediate cleansing (Ikpo Alu) . Another person, was interviewed, he suggested that he was of the opinion that the Catholic Church should strip Rev Sis Maria Amadeus Egbuonu of her sisterhood, because her actions was against the custom of the land and an insult to the Catholic Church in general. A group of youths were interview also, they demanded the immediate banning of Rev Sister Maria Egbuonu and her siblings from the community and demanded the immediate cleansing of their land to avoid any calamity befalling their land. From further enquiries it was gathered that, the Archbishop of Onitsha Archdioceses, Archbishop Valerian Okeke condemned the the method, the Reverend Sister, handled the matter.

It was gathered that Uruagu Village has mandated the family to perform immediate cleansing, that the action of Rev Sister Maria Amadeus Egbuonu was sacrilegious and abominable and are still on deliberation on the sanctions that will be imposed on the said Reverend Sister and her immediate family for their actions.

In Umudioka custom and tradition, it is a taboo for a woman to bury the dead,and without the consent of the dead man’s family.

Umudioka community are calling on the authorities of the Catholic Church such as,The Archbishop of owerri diocese,the Mother General of Immaculate Heart Congregation Awo Omamma Owerri Archdioceses, the Mother Union of Catholic churches, Catholic Priests Association from Umudioka, the Catholic Archbishop of Onitsha Archdiocese to issue a serious sanctions on Rev Sis Maria Amadeus Egbuonu, till she settles peacefully with her family members.