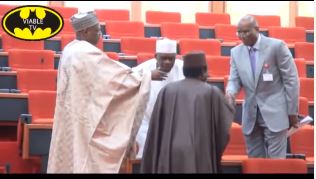 Senator Ovie Omo-Agege in the senate

Senator Ovie Omo-Agege arrived at the Senate Chambers on Wednesday morning after a Federal High Court nullified his six months suspension by the Senate.

The lawmaker who earlier promised to resume on Tuesday for legislative proceedings did not resume after the Senate had said on Monday that it will allow him to resume in accordance with the court rulings.

But the Senate Spokesman, Aliyu Abdullahi said in a press statement that the upper chamber has filed an appeal against the court judgment and a motion for stay of execution of the judgement at the court of appeal.

Below is a video of the senator as he resumed plenary: