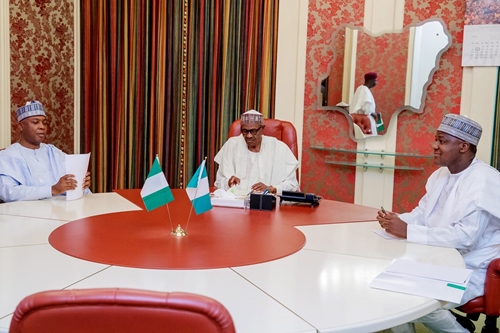 Senate President Bukola Saraki and Speaker of the House of Reps, Yakubu Dogara, said they discussed the ongoing trial of the Senator representing Kogi West at the National Assembly, Dino Melaye, with President Muhammadu Buhari.

They said they also reported the Inspector-General of Police, Ibrahim Idris, to the President for failing to appear before the Senate twice in one week over the Melaye issue.

The two leaders of the National Assembly also said they did not discuss the impeachment process raised against Buhari a fortnight ago in the Senate.

Saraki and Dogara, made this known to State House correspondents on Monday after a closed door meeting with the President in Abuja.

“Just talking about the issue of the Police. We, also, of course, raised the non-appearance of the Inspector-General of Police at the Senate and felt that we must continue to ensure there is adherence to constituted authority.

“He is a great concern, this is the first time it happened and that matter needs to be addressed.

“And there is need for the Police to accept that they, too, are under that constitution and they must obey that; we raised that concern.’’

The Senate President, who stated that the leadership of NASS was in the Villa on the invitation of the President, gave an assurance that the appropriation bill would be passed by the NASS next week, if laid before it this week.

He said: “Well, we came on the invitation of Mr. President. He wanted to brief us on his trip to the United States and also on the issue of the budget.

“We also talked on the issue of concerns to us, the invasion of the National Assembly, which he showed great concern for and said action will be taken to investigate that.”

Dogara, who also spoke on the outcome of the meeting, said the NASS leadership did not discuss the issue of impeachment process that was raised at the National Assembly two weeks ago.

He, however, frowned at the way and manner the police handled the case of Senator Dino Melaye.

He said, “Anything that happens to any member of the National Assembly is of concern to us. And there is no way we can have this kind of meeting without raising that.

“There is nowhere that Police will behave in a democracy like a clan of tribesmen, like an upgraded barbarians, sort of.’’

The Speaker also condemned the situation where Melaye was stretchered to court by the Police, saying that the rule of law must be observed to safeguard the image of the Buhari administration

“A situation where people are wheeled to court, that doesn’t give good image of our democracy.

“I have not seen a democracy where people are wheeled to court, they are not in the proper frame of mind and they are forced to undergo trail.

“Whatever it is, even if Dino is pretending as some have said, he cannot pretend forever. He is there, he will not run away, he is a senator and he can be tried any time he is in proper frame of mind.”