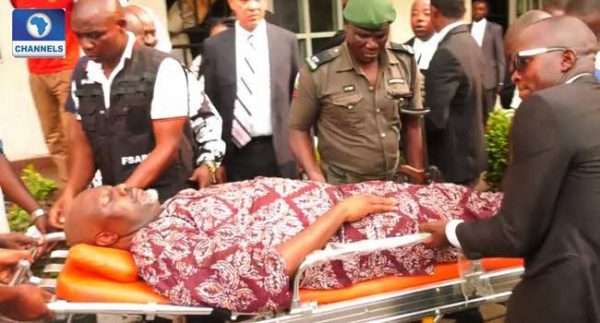 He was promptly rearrested.

The police have no revealed why he was rearrested, asserting that the Senator still had pending offences of criminal conspiracy and unlawful possession of prohibited firearms to contend with.

The statement, prepared by Force Public Relations Officer, Jimoh Moshood, said; “The Police investigation team re-arrested Senator Dino Melaye today, 2nd May 2018 after his arraignment at Chief Magistrate Court, Wuse for the pending offences of Criminal Conspiracy and Unlawful Possession of Prohibited Firearms already filed in a Court of competent jurisdiction in Lokoja for which he will be arraigned without further delay,”

The arraignment of Melaye was carried out after he was passed fit to face trial after being discharged from the hospital.

The Senator had landed in the hospital after he attempted a daring escape which went horribly wrong.

He was being transported to Lokoja where he was to be questioned by Police in connection with the allegation that he armed some thugs and in relation to other criminal activities.

Enroute to their destination, the Senator had jumped from the moving vehicle in a bid to escape which the police saw as a suicide attempt. He was also accused of threatening the Police that he’d implicate them if any harm came to him.