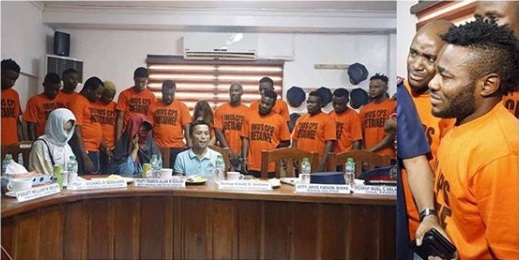 The Nigerians who were caught for fraud

Phillione Police have arrested 13 Nigerian nationals and a Filipino accomplice allegedly behind an “online scamming syndicate” that victimized Overseas Filipino Workers (OFWs) and other nationalities, during raids conducted overnight in Imus City in Cavite province.

Imus City police chief, Supt. Audi Madrideo said members of what he described as an “online syndicate” would create fraudulent Facebook accounts, with stolen photos and profiles, and pose as members of the United States military.

Emmanuel Nnandi, a Nigerian national and one of the alleged group leaders, was arrested in an entrapment operation around 7:30 p.m. Sunday in a money transfer outlet in Barangay (village) Tanzang Luma 2.

Nandi led authorities to other members of the group who were consequently collared from three apartments in Imus City.

“They would woo their victims by chat. Once hooked, they would promise to send them gifts or money, some as much as $2.5 million, from abroad,” Madrideo said in a phone interview.

The catch, however, was that in order for them to allegedly send the package, the victims had to wire some money first in the guise of shipping or customs fees.

Police found out that the Nigerians had entered the country using student visas. It was allegedly the same group that faced complaints in Pasay City and Las Piñas City before they moved to Cavite province.

As of this posting, authorities were preparing to file a case of syndicated estafa against the suspects, who will be presented in a press briefing on Wednesday by regional police head Chief Supt. Edward Carranza. /kga