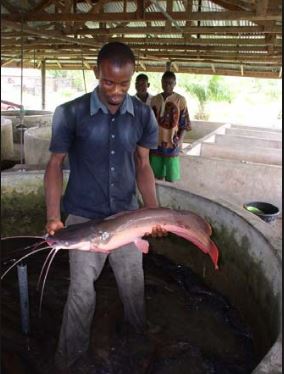 Police in Osun state yesterday arraigned 3 men in an in an Osogbo Magistrates’ Court over alleged theft of cat fish worth N4.3 million.

The defendants are Ojo Michael, 33, Ojo Dayo, 23, and Matthew Emmanuel, 22, whose addresses was unknown.

The Prosecutor, Insp. Olaiwola Rasaki, told the court that the defendants committed the offence on Jan. 14, at Power line Area, Osogbo.

He said the trio conspired and entered a fish pond belonging to one Owolabi Tajudeen and stole cat fish worth N4, 281,200.

The prosecutor said the offence contravened sections 516 and punishable under section 390(9) of the criminal code cap 34 vol.11 laws of Osun, 2003.

The defendants pleaded not guilty to a two- count charge bothering on conspiracy and theft.

The Defence Counsel, Mr Oyegbemi Adediran, prayed the court to grant his client bail in the most liberal terms.

The Magistrate, Mrs Aishat Ajanaku, granted the defendants bail in the sum of N500, 000 and two sureties each in the like sum.

Ajanaku said the sureties must reside within the court jurisdiction, produce evidence of tax payments and three passports sized photographs, attached with an affidavit of means.

The case was adjourned until July 12 for hearing.