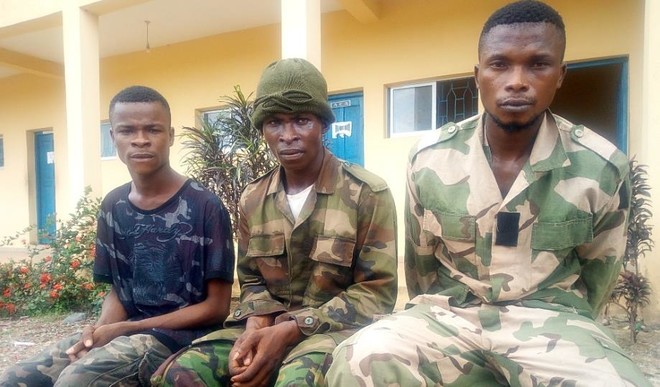 Speaking during the parade at the police command headquarters in Osogbo, capital of Osun state on Saturday, the Commissioner of Police, Mr Fimihan Adeoye explained that the suspects kidnapped Mr Kayode Agbeyangi and Mrs Oyeyemi Obafemi along Ilesa/Ibadan expressway on 14th of April, 2018.

He said the victims were traveling on the highway when the suspects shot the tyre of their Toyota Camry car. As a result, the car stopped and the suspects who clad in army uniform forced the occupants of the car to come out.

According to him, “The occupants of the car wanted to change the tyre of the car and continue their journey. That was how the suspects who dress in army uniform came out from the bush and kidnapped them.”

The suspects kept their victims in captivity for four days and eventually collected ransom of two million naira from the relations of their victims before the two persons were released.

He added that one AK47 rifle with double magazine fully loaded with ammunitions and four pairs of army camouflage uniforms were recovered from the suspects.

The CP said the matter is still under investigation and that the suspects would be charged to court after the investigation.