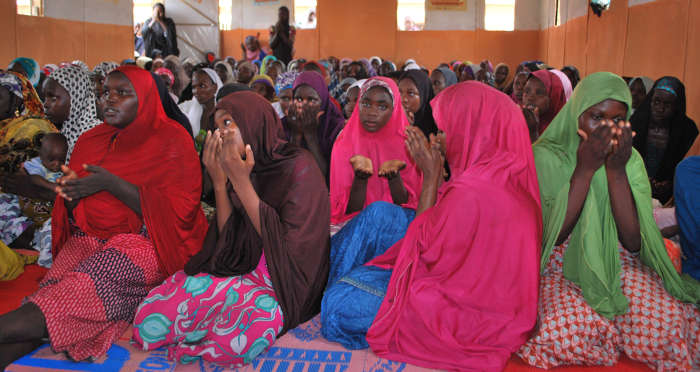 Some Borno Internally Displaced Persons (IDPs), from five local government councils have denied  Amnesty International report on alleged rape and human right abuses against them by the military.

NAN recalls that AI had in its latest report alleged that Nigerian soldiers raped thousands of women and girls who escaped from the Boko Haram insurgents.

The organisation also alleged that the soldiers killed many people who refused to be moved from territories rescued from the insurgents.

But in separate interviews with the News Agency of Nigeria (NAN), in Maiduguri, some of the IDPs denied the allegation, saying it was a fabrication.

The IDPs who reacted to the NAN interview were from Marte, Monguno, Gwoza, Gwuzamala, Nganzai, Bama and Konduga, some describing it as an outright fabrication while others said only civil cases had been recorded in camps within the last four years.

Aisha Bukar, an IDP in Bakassi camp, said there were no cases of rape recorded in the camp within the last four years.

Bukar said that soldiers were hardly seen in the camp premises except Non Governmental Organisations like SEMA and NEMA providing support to the IDPs.

She said the soldiers only came into the camp during the distribution of food to keep the order.

Hauwa Ismaila, another IDP said most cases recorded in the camps were civil cases such as fighting, arising from misunderstanding between persons in the camp.

Ismaila admitted some cases of sexual exploitation had been reported, but it was between IDPs not with the military.

Mabruka Dibal, another IDP from Gwoza said that the military had been very supportive by providing protection and ensuring that everyone was safe.

Dibal said that it was unfortunate that some people were working towards frustrating the military men who had been sacrificing their lives to protect people.

“I think they are trying to divert attention of fighting troops. Nobody is raping us. We have been protected for over four years. You can go around and ask anybody,”she said.

Falmata Bukar, the Women’s leader in Dalori IDPs camp, also corroborated  the denials, saying they have been living in the camp peacefully.

Bukar said: “We are IDPs from Bama and I can assure you that nothing of such has ever occurred in the camp in the last four years.

“We have had some cases but mostly they were between our IDPs. Those who were found wanting of taking advantage of the female IDPs were arrested and punished.

“We have referral centres where cases of human rights and other forms of abuses were reported and addressed,”she said.

NAN reports that officials of aid groups working in the camp also denied the allegation.

Hajiya Yabawa Kolo, The Chairperson of SEMA  told NAN that the agency had not received any case of domestic violence against IDPs in any of the camps across the state.

“We have our camp managers and camp supervisors who monitor the day-to-day activities in the camps. We have put in place a feedback mechanism of reporting such cases”.

Ali Maina, The Bakkassi camp Coordinator, said no cases of domestic violence were recorded in the camp, adding that  the camp was working toward  ensuring  that the  welfare of all IDPs was pioriotised.