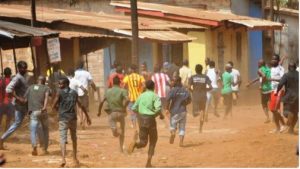 Fulani herdsmen have allegedly slaughtered over 200 people in Barkin Ladi, Plateau State in Sunday attack. According to multiple reports, the victims had their homes and Churches burnt and their lives cut short by the invaders.

Former minister of Aviation in his reaction said President Muhammadu Buhari has said or done nothing as regards the latest attack. He wrote;

Fulani terrorists have slaughtered over 200 people in Barkin Ladi, Plateau State today. Again the victims are Christian indigenees of the state who have had their homes and Churches burnt and their lives cut short by these fiendish invaders. Buhari has said and done nothing!

Following the fresh attack, the Plateau state government has imposed a curfew on Riyom, Barakin Ladi and Jos south local government areas of the state. Ladi Choji, president of Berom Youth Movement, told newsmen that 72 corpses had so far been recovered as 31 corpses were recovered from Gashish village, 41 others from different villages in Barkin Ladi.